Back to Profile Gallery > Magic Wok 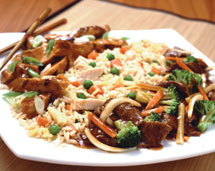 When Sutas Pipatjarasgit came to the United States from Thailand in 1968, he had a lot more than the few hundred dollars in his pocket. He had an entrepreneurial spirit that eventually led him to found Toledo-based Magic Wok, a family owned chain of Asian-style restaurants that now has eight locations in Ohio, three in Michigan and three in Bahrain. In addition to Magic Wok, the family owns two Tropical Grill & Juice-branded locations, one in Ohio and one in Michigan.

“My father’s original plan was to come to New York, go to school, work for a few years and move home, but after he started working in a restaurant as a waiter, he saw he could make money here,” President Tommy Pipatjarasgit says. “He wanted to start his own business and control his destiny. Eventually, he opened a quick-serve location in a mall in Toledo. It was a hit, and we’ve been looking at growth opportunities ever since.”

Able to Compete
The Asian food segment is one of the most popular in the United States. It is growing, and there are a lot of competition and concepts. Magic Wok’s approach is to differentiate itself based on food that is freshly made to order in an open kitchen. The company’s relatively small size allows it be flexible and set up operations in many different sizes of units, some of which have drive-thru service.

The company has experienced little turnover in management over the years and tends to promote from within as it grows. Some of its managers have expressed interest in owning locations – most of which are company-owned – and Magic Wok is looking at a format for growth where managers can own locations through a franchising system.

“In fact, one manager will be taking over one of the Toledo locations in a few months,” Pipatjarasgit says. “We see that as an important growth strategy that helps with maintaining quality, consistency and brand integrity. It is a good way to go because our managers have been with us a long time and know what we want in terms of quality of food and customer service.”

One of the ways Magic Wok has evolved over the years has been in the expansion of its menu. When it started, it offered a more traditional Chinese menu. That has evolved to become more pan-Asian, now offering various Japanese and Thai dishes, for example.

“The consumer palate is more sophisticated, and they want more and stronger flavors, and more excitement,” Pipatjarasgit says. “That is where we are going with our menu, and we’ll be testing other dishes from Southeast Asia to see if that is what consumers are looking for because that is what we think they want.”

Not Stopping Now
As the company invests in future growth, the plan is to look for locations with smaller footprints. Right now, the goal is to grow to 30 stores by 2015. Since real estate is getting more expensive, the company has engineered a concept that allows it to fit into smaller spaces.

“We took over a gas station, for example, that was in a great location on less than half an acre,” Pipatjarasgit says. “We were able to engineer our concept and put a Magic Wok with a drive-thru window there.” One factor it looks for in locations is proximity to high-traffic areas in spots that other companies couldn’t make work.

Recent back office changes include updating its operations with a new point of sale system, a big investment for the company. The company chose Radiant Systems’ Aloha POS solution, which allows the company to better view its sales mixture and track what is selling and what isn’t, and what marketing efforts and ads work and which don’t. That information influences the company’s strategic thinking.

Faced by challenges such as the rising cost of food, the company knows it must continue to look for ways to work with its management team to control costs as much as possible. Margins can be thin, and some prices might have to go up as commodity prices increase.

Magic Wok also plans to come up with out-of-the-box advertising campaigns and increase its use of social media. It has backed away a little from traditional advertising in favor of doing more with Facebook, Twitter and online contests. Facebook appears to be paying particular dividends for the company, as its page has grown in popularity. Some of its fans have even created Magic Wok commercials.

This connects to the company’s mission of connecting with its patrons because, to Magic Wok, they’re much more than customers – they are friends and neighbors.

“We’re having fun with that,” Pipatjarasgit says. “We try to use local suppliers, and we like to give back to the community through cash, in-kind donations to different charities and nonprofits because we are from this community. This is where we are raising our families, and we’re proud to be members of this community.”