Back to Profile Gallery > Malco Theaters 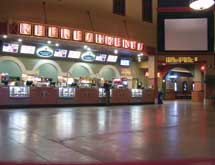 In a sea of corporate-run movie theater chains, Malco Theaters Inc. has effectively swum against the tide. The fourth-generation family owned business is the 15th-largest theater circuit in the country and has operated throughout the south-central United States for more than nine decades. The Memphis-based company will continue its success by maintaining its tradition of providing quality, personalized services while staying ahead of new trends, Senior Vice President Larry Etter says.

Malco was founded by M.A. Lightman Sr., an engineer who by happenstance came across a storefront where a number of people were inside watching a moving picture. Marveling at the spectacle of eager patrons waiting to get inside, Lightman saw an opportunity. He purchased his first theater in Florence, Ala., in 1915 and strategically grew the business. Today, Malco is led by his grandson, President Stephen Lightman, and great-grandchildren. The company operates 28 theaters in Tennessee, Missis-sippi, Arkansas, Missouri and Kentucky with a total of 318 screens.

With its 100th anniversary just three years away, Malco is undergoing a renaissance, Etter reveals. The company has spent the past three years building new theaters, upgrading its current facilities and retooling its presentation package to suit the changing needs of patrons in the 21st century. It has been adding new locations to its present geography and expanding its screen capacity in existing theaters.

One of its most demanding commitments, according to Etter, is its decision to invest in 3-D projectors. “Within two to three years, there won’t be Teflon film anymore; everything will be done digitally,” he says. “Our company distinguishes itself from its competitors by maintaining a high level of expertise in its presentations. We offer the highest-quality projectors and the highest-quality sound, and we take a lot of pride in delivering consistency so that people appreciate the theater experience.”

Creating an Experience
American theaters struggle to compete with movie delivery services, such as Netflix, which is why Malco’s attempts to create a memorable experience for moviegoers is all the more critical, Etter explains. “We’re offering a new type of presentation with heavier, wider seats that have tables next to them, which corresponds with new services being offered,” he says. “A number of theater circuits believe the theater experience should include food and beverage. It’s not only about popcorn and Coca-Cola anymore – it’s about a total dining experience: an evening out, so to speak.

“The American theater owner is looking for ways to keep people at the cinema spending money for a longer period of time, and food and beverage is one of those ways,” Etter continues. “We have VIP tickets that we sell to local restaurants at a discounted rate, so people can have dinner at a fixed price and get movie tickets, as well.”

Movie studios provide incentives to theater chains like Malco to use “souvenir” paper cups and popcorn vessels displaying certain movie logos for promotional reasons, but it also benefits the theaters to participate since nearly half of their revenue comes from food and beverage sales.

“Our objective universally throughout the theater circuit is to increase the food and beverage percentage,” according to Etter.

‘Let’s Go to Malco’
Ever the entrepreneur, Malco has identified some nontraditional ways to increase its revenues, especially during off-peak hours. “Typically, from 8 a.m. to noon, when we’re not showing movies, we try to increase the usage of our space in a positive way,” Etter says. “We have started to use our auditoriums much like a convention center or a hotel in that we set spaces aside for seminars and other events, which we accent with a continental breakfast or box lunches.”

In line for Malco’s future is the construction of an entertainment complex in Gonzales, La. Nevertheless, the Malco name is and will always be synonymous with going to the movies. “Here in the South, people don’t say, ‘Let’s go to a movie tonight,’ they say, ‘Let’s go to Malco,’” Etter says. “That brings us a huge sense of pride.”