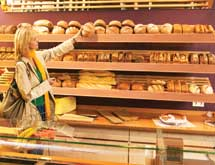 Everyone in southeast Virginia knows that nobody bakes breads better than Mama. Named after the founder’s wife – “Mama” Ada Kayer – Mama Kayer’s Bakery has been filling its customers’ carb needs since 1910. Although it is best known for its variety of soft bread products, such as French breads, Italian baguettes, Kaiser rolls and deli- or club-style loaf breads, Mama Kayer’s distinguishes itself from other bakeries through its rich history.

Louis Kayer, an immigrant from Russia, purchased Baltimore Bakery in 1910, and renamed it after his wife. Back then, the bakery was a small operation with one real brick oven. With the help of Louis and Ada’s sons, John and Max Kayer, the bakery moved to its current location on Kingwood Avenue in Norfolk, Va. It continued to flourish under the leadership of its third generation until a competitor caught Mama Kayer’s attention in 2004.

Known as “the place to stop for a fresh baked treat” in downtown Newport News, Va., Brenner’s Bakery has a history similar to Mama Kayer’s having been founded in 1918. After the business underwent some leadership changes, it was sold to John and Christine Mathis in 1998. John had a long career in commercial baking, working for major players like Wonder Bread, Hostess Cakes, Brownberry Ovens, Pepperidge Farms and Lender’s Bagels. Brenner’s Bakery was eventually taken over by the third generation when Jason Mathis became part owner.

When the third generation of Kayers – Barry and Steve – approached Jason Mathis about the possibility of merging operations, Mathis did not hesitate. In 2007, Mathis took over as president of the new company, keeping the Mama Kayer’s Bakery name.

“I am proud of our heritage,” Mathis states. “There is a lot of history involved here. It is a unique sense of pride of being able to carry the torch. We have a fun and unique [environment] all in one shop.”

Mama Kayer’s has always placed service at the top of its priorities. “Service has always been the key,” Mathis stresses. “It’s about producing the highest-quality products based on what our customers want.”

Supplying to Farm Fresh stores, military commissaries, BJ’s Wholesale Clubs, Costco Wholesale Clubs, Sam’s Club stores and select Food Lion stores, Mama Kayer’s says it has a unique position in the industry. “The niche for us is to pick up where the big guys leave off,” Mathis continues, noting that most of its competitors don’t take risks.

“We are more creative,” he notes. “We do something that fits every customer’s needs. For example, if you want a roll that has a specific shape, we will do it. We cater to our customers, whatever it is they may need.”

Mama Kayer’s carries 128 different SKUs that run the gamut of flavors and styles, including Mama’s original and honey wheat, as well as Brenner’s white and Italian. The company produces about 100 of these products every day and delivers to 18 routes from Richmond, Va., to the Carolina/Virginia state line.

The bakery industry is a tough market to be in, but Mama Kayer’s manages to keep its head above water. “One of our challenges is the stiff competition,” Mathis points out. “Sure, we are the largest bakery of our size in our demographics, but there are bigger and smaller bakeries than us [that target the same market], and then you have the frozen market. We get hit from all sides. So, we just have to try to establish and monitor that level of service that our customers want. We do everything we can to adapt.”

Controlling costs is important, too, especially in the current state of economy. “When the price of fuel hit about $4 per gallon, all commodities went up, especially flour,” Mathis recalls. “Everyone that dealt with cooking was hurt, but we made sizeable and drastic cuts to make sure we can survive that challenge.”

Knowing what you’re good at helps, too. “We have competed by finding our niche and working on that niche,” Mathis states. “We produce a lot of products on a daily basis that [some of the bigger companies] don’t produce. And when we do it, we do it in a higher caliber than them.” In fact, in a blind taste test, restaurants around southeast Virginia prefer Mama Kayer’s rye bread, Mathis adds. The firm is also leading its market with whole wheat and multi-grain products.