Back to Profile Gallery > MaMa Rosa’s 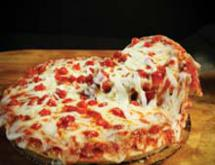 With its tomato sauce, cheese topping and crispy crust, pizza has remained in demand, which makes it a very strong category to grow into – even for MaMa Rosa’s, the largest-selling branded, refrigerated pizza manufacturer in the United States. Based in Sidney, Ohio, MaMa Rosa’s sells more than 3 million cases of pizza annually and distributes to more than 10,000 supermarkets, club stores, pharmacies and convenience stores. President Bill Mackin says the company, which holds almost 70 percent market share, started operations in 1980, when founder Mike Gilardi sold his pizzas to grocery stores like Kroger. Gilardi experienced success in the 1980s and 1990s, as the company perfected its refrigerated pizza product.

In 1998, Gilardi sold the company to ConAgra Foods Inc., which retained ownership until 2006, when it sold the company to Plaza Belmont, a private equity firm based in Leawood, Kan. Since then, the company’s leadership has strived to revitalize MaMa Rosa’s, Mackin says.The company’s 170,000-square-foot facility, which operated at 40 percent capacity in 2006, now operates at around 70 percent capacity, Mackin says. The company’s location features six production lines, three bakery lines and three topping lines. The company’s lines include nine products, including its flagship large, two-pack pizza products, which are designed to feed a family of four to five, Mackin says. The company rounds out its offerings with> > mini four-pack and small, single-serve pizzas, providing a product for virtually every meal occasion.

Mackin adds that convenience stores are among the company’s growing customer bases. For instance, MaMa Rosa’s products are carried by the Speedway gasoline and convenience store chain, which has approximately 1,500 stores.“We’ve been able to have great success [with Speedway],” Mackin says, noting that MaMa Rosa’s was in strong competition with other companies to win the chain as a client. “Speedway became the top customer in our portfolio.”MaMa Rosa’s also markets and sells products designed specifically for warehouse and drug stores.

One of the strongest assets that has led to MaMa Rosa’s success is its experienced staff, Mackin says. He notes that the company employs several who have nearly 20 years “in the top leadership positions, from the chief financial officer to the senior vice president. “It is a very important piece of information in due diligence,” he says. “It shows that things have been relatively stable [at MaMa Rosa’s]. That stability and our leadership team’s deep industry knowledge put us in a strong position for future growth.”

Additionally, the company has achieved Safe Quality Food (SQF) Level II certification for its pizza and dough products. The certification provides independent verification that a supplier complies with domestic and international food safety regulations. “At this point in the United States, less than 5 percent of the companies have the SQF certification,” Mackin says. “The SQF designation assures our customers that we produce, process, prepare and handle food according to the highest possible safety and quality standards at all levels of the supply chain.”The process to earning this certification was extensive. “It took us almost a year to complete the certification and audit process,” Mackin says.

Branching OutWhile MaMa Rosa’s has specialized in serving retail clients, “We’re starting to look at some of the other channels and had a little fun leveraging the other capacity,” Mackin says. “We were kind of a one-dimensional company in 2006.”For instance, two years ago, MaMa Rosa’s bought California-based Virga, a crust and dough ball company. Additionally, the company recently secured the rights from Myrna Rae LLC to produce and distribute the first-of-its-kind refrigerated, football helmet-shaped Tailgate Party Pizza, which will be supported by a marketing campaign in trade media, and a trade and consumer media relations campaign.

According to Mackin, the product will create excitement in the refrigerated pizza category. “Football has overtaken baseball as the spectator sport of choice in the United States, and pizza usually is on the game day table when friends and family gather to cheer on their favorite teams,” he said in a statement. “In fact, more pizza is consumed during the Super Bowl than on any other day of the year.”Based on expected retailer and consumer response to its Tailgate Party Pizzas, Mackin said he anticipates that MaMa Rosa’s will explore other novelty-shaped pizzas in the future.

In conjunction with philanthropist Harris Rosen, MaMa Rosa’s also has developed a nutrition-oriented platform for children. In Ohio, the company has started providing its products for school cafeterias and, in the next 24 months, will move this product line to a national platform. The school pizzas, sold under the Rosen’s Perfect Pizza brand, use turkey >> pepperoni, reduced-fat pepperoni toppings and 51 percent whole-grain crusts to meet the national child nutritional label’s full-lunch requirements.“We’ll look at what we can do to try to be in compliance with [preventing] childhood obesity,” Mackin says. “Harris is a great guy who is looking to change the world in terms of education and the healthcare system.”MaMa Rosa’s also recently entered a partnership with ABI, an Ohio vending company. The agreement will allow consumers to take pizzas directly from the vending machine to the microwave.

MaMa Rosa’s also has spread its reach outside the United States by providing its pizza to school cafeterias and U.S. military bases in Puerto Rico. “We do have a great channel of distribution with the military itself,” Mackin says. “We’re [also] starting to look at troop feeding.” Further, the company is shipping its products to customers in Mexico, Canada and India, making adjustments to meet the preferences of consumers in those cultures. Rather than the pepperoni and sausage favored in the United States, Canadian consumers prefer such toppings as ham and pineapple, and a veggie-topped pizza MaMa Rosa’s offers in India is being well-received, Mackin says. “[It] is very different than what we see in the States,” he says, adding that the Canadian market offers lucrative opportunities, and that India has the potential to grow into a million-dollar sales program.

MaMa Rosa’s also developed partnerships with film studios, including Warner Bros. in its presentations of such films as “Cats & Dogs: The Revenge of Kitty Galore” and “Yogi Bear.” Mackin notes that studio relationships have allowed the company to make customers special offers through its products.For instance, if buyers “change up our labels with three proofs of purchase, they get a movie ticket,” Mackin says. MaMa Rosa’s also is working with Marvel Comics to offer free online gaming subscriptions to young adults in 2011. The subscriptions will draw on Marvel’s iconic heroes and villains, allowing players to team up with friends to engage in online combat and explore interactive environments.

“That’ll be the first time, we think, that a consumer product has presented online gaming,” he says, adding that this unique marketing effort could lead to strong business for MaMa Rosa’s. “We expect to have some fun with that.” Mackin also reports that MaMa Rosa’s has been developing a breakfast pizza over the last six months, and that he sees a strong future for the pizza industry, in general.“Ready-to-go, prepared pizza seems to have [strong] acceptance as we look at most of the major retailers in the United States,” he says. “The recession has made cooking at home fashionable again, and pizza is a top home meal replacement favorite. Those trends have made refrigerated pizza into a sales leader for food retailers.”

Refrigerated pizza has, in fact, become supermarkets’ hottest perishable item, and the third-fastest-growing category in supermarkets overall. “We’re excited about what the future of refrigerated pizza may [hold],” Mackin says. “Pizza is one of those foods that has shown growth for the last 30 years, with about 20 percent growth over the past year alone, and MaMa Rosa’s is well-positioned not only to continue its leadership role, but also to gain greater market share.”