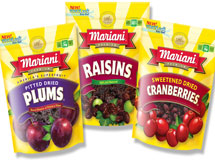 “In this business, there are what we call the three legs of the stool,” says George Sousa, a fourth-generation Mariani and president of Mariani Packing Co. Inc.

“The three main commodities are raisins, cranberries and prunes, and any retail customer will always want those three items, plus a variety of other items. We are the only company that I know of in the world and certainly in the U.S. that is vertically integrated in all three.”

Prunes have been vertically integrated into the company’s process since its 1906 founding. In 1992, the company added raisins as a vertically integrated product. In April, Mariani added its last piece to the puzzle when it acquired Urban, a Wisconsin-based family company that’s been in the dried cranberry business for 10 years and a supplier to Mariani for the past five years prior to its acquisition. Mariani sources from select growers and then processes, packs and ships its own product.

As Mariani integrates and transitions the newly purchased company under its leadership, the Wisconsin facility continues to work at full capacity, processing cranberries and producing cranberry concentrate. In the next year, Mariani will triple the facility’s size.

Mariani has long supplied cranberries to its customers, even sourcing from Urban before acquiring it. So why the large expenditure on an acquisition and expansion? As Sousa explains, investing in becoming fully vertically integrated is necessary to stay relevant in a world economy.

“The economy is tough, and stores are trying to keep economical products in their stores,” Sousa says. “However, commodity costs are rising in all different segments. Because of that, stores are going more to private-label packaging, and as that happens it impacts a number of national brands in any category.

“We need to ensure we are well positioned to provide both our branded as well as private label products to our customers,” he continues. “In addition, cranberries are a very important part of our customers’ ingredient portfolio.”

Customers want to deal, whenever possible, with suppliers that are vertically integrated, avoiding paying re-baggers who buy fruit from someone like us and then pack it in their facility.

Mariani’s primary goal is to grow its own brand – a name recognized from coast to coast. By vertically integrating the “Big Three” into its processes, the company is able to efficiently and consistently provide the high quality products its customers expect. With its acquisition of Urban, Mariani has propelled itself beyond household name status; it has made itself a cost-effective vertically integrated processor of the three major dried fruits, which account for 80 percent of dried fruit retail sales.

“Customers want to deal, whenever possible, with suppliers that are vertically integrated, avoiding paying re-baggers who buy fruit from someone like us and then pack it in their facility,” Sousa explains. “This leads to double overheads on these items. . . [Our vertical integration] also allows the customer to be very cost efficient on the three largest items they buy.”

It then leverages this revenue stream and invests it back into the Mariani brand. “We have traditionally sold our brand first, and everything we do from a resource and investment side is to grow that segment first,” Sousa explains. “The reality is private label is becoming much bigger in the food area, and we have adapted to take advantage of it. However, our primary focus is still our brand.”

But it doesn’t just focus on the name. The familiar logo draws in consumers initially, but the quality and variety keeps them coming back. In addition to the “Big Three”, Mariani carries more than 30 products in seven different categories: orchard fruit, berries, tropical fruit, yogurt-coated fruit, raisins and dates and sundried tomatoes. It is also the U.S. distributor for Honey Bars, which are produced by a Canadian food manufacturer.

Mariani ships 150 million pounds of product a year all from its Vacaville, Calif., headquarter where it also processes and packages. In Fresno, Calif. – a central location for nearly 90 percent of U.S. raisin makers – the company has raisins   delivered to its facility for cleaning and grading before shipping it to Vacaville for processing and packaging. Its Yuba City, Calif., facility processes prunes, peaches, pears and apricots, and in Lake County, Calif., Mariani owns a vineyard where it grows wine grapes. The Wisconsin facility now handles all of its cranberry production. From Vacaville, the products go their separate ways to Mariani’s three major customer segments.

Sousa estimates that Mariani’s branded products are available in about 40,000 retail outlets in the United States. Grocery retailers such as Safeway and Kroger’s are major customers, as well as mass merchandisers or club stores such as Walgreens, Walmart and Costco – companies that sell groceries but are not strictly grocery stores. Ingredient and cereal customers are another major customer. Mariani has held a contract with Kellogg’s for the past 24 years as the company’s exclusive raisin supplier. The third target is international companies, some who buy bulk product from Mariani and repackage it with their own labeling or buy Mariani’s branded or private label products. Mariani ships product to 52 countries. “Our business is split into three categories … and they are equal in revenues,” Sousa explains. “The poundage is different because we may be selling a 25-pound box vs. a 6-ounce bag, but from a dollar revenue side, it is split evenly between the three.”

No matter the customer, Mariani has adapted to every market need for 105 years, even leading the way at times. The company has a steady history of innovation, but Sousa maintains that its biggest advantage is the thing that never changes.

“There is a saying that a competitive edge is something you can’t buy or copy, and you can’t buy or copy a company that has been a family run business for 105 years,” he says. “A family run business creates a lot of the relationships and trust you need to have in place all the way from the grower to the customer. At the end of the day, I would say that is our biggest advantage.”