Back to Profile Gallery > Mario’s Pizza 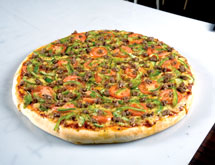 Regional variations can make all the difference when you’re talking about pizza. For example, a Chicago deep-dish pie can’t hope to compare to a New York-style slice in the eyes of some, but it’s hard to image either city dipping their pizza in maple syrup, as the Japanese have been known to do. That’s why Mario’s Pizza is the largest pizza chain in Trinidad and Tobago, according to Assistant General Manager Roger Harford – it can cater to the unique tastes of its customers. Even with fierce competition from the best-known chains in the industry, Harford says Mario’s Pizza continues to distinguish itself as Trinidad and Tobago’s favorite.

Although pizza is a fairly new addition to the cuisine of Trinidad, it has become very popular, with more than 50 restaurants serving a population of about 1.3 million. Given the small size of the island, Harford says, the number of restaurants “is a lot.”

One of the primary reasons for the success of Mario’s Pizza is the same reason Harford’s father was able to popularize pizza in Trinidad in the first place. Harford explains that Mario’s Pizza uses New Zealand cheddar cheese rather than mozzarella in its recipes because of how it appeals to its customers’ tastes. “It has a more distinct flavor, and Trinidadians like more sharp, bold, robust flavors, and New Zealand cheddar provides that,” Harford says. “Our pizza sauce also has a lot of herbs and spices, and even some local herbs in the recipe, so there’s more of a potent flavor in our sauce.”

Harford says the international chains have only recently tried to adopt the same formula by using cheddar in their cheese blends. He says those chains also have tried to emulate Mario’s Pizza in terms of the unique toppings it offers.

Although Mario’s Pizza doesn’t have the same marketing budget as its larger competitors, Harford says the company has been successful in getting its message to customers. In addition to traditional media, Mario’s Pizza began utilizing social media like Facebook, where it has the second-largest fan page among all Trinidadian businesses with more than 78,000 followers.

The company has a lot of friends on Facebook, but it could use more employees, Harford says. “Our biggest challenge has been the availability of labor as well as the quality of labor,” he says. “This is not unique to us; it is a nationwide problem.”

With good help being hard to find, Harford says Mario’s Pizza is working to provide incentives to retain the skilled employees it has while also working to reduce its reliance on labor. For example, the company is centralizing the production of its pizza dough, and Harford says it is investing heavily in machinery to automate this process.

Despite these challenges, the future looks good for Mario’s Pizza. “There’s a lot of expansion that can be done here in Trinidad,” he says. “We feel we can easily open at least six more stores with in Trinidad and To­bago before the market becomes oversaturated.”

The company also is looking at franchising outside of Trinidad and Tobago, with St. Lucia, Jamaica and Barbados likely places for future expansion. Mario’s opened franchises both in St. Vincent and Guyana well over a year ago and it expects to continue to make inroads within those countries. Harford says Mario’s Pizza sees Guyana, the only English-speaking country in South America, as a good place for the company to gain a toehold on that continent, which has huge potential and seems to be an easier major market to penetrate than the more competitive and aggressive North American markets.