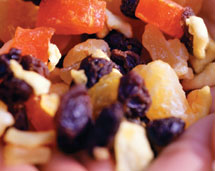 The commitment to supplying the highest quality products possible along with ensuring that Marra Brothers’ products are fresh when customers receive them is contributing to the success of Marra Brothers Distributing Inc., a distributor of bulk and packaged food products in the San Francisco Bay area.

“We’ve kind of just concentrated on this area, the independent markets, and there’s a lot of produce stands,” points out Linda Marra, CFO, vice president and secretary/treasurer.

“Most are open all year long, some are seasonal, so in every area it is a little different. The biggest chain we have is nine stores.

“When we started, it was out of our garage, and we had maybe about 65 items,” she remembers. “Now, we carry over 2,000 items, and we’re in a 20,000-square-foot warehouse.” The products are diversified so that they can service all departments in the grocery stores: grocery, produce, deli and meat.

Servicing for the Stores
A key aspect of Marra Brothers’ business plan is that it essentially manages the bulk food business for its customers. “We do store servicing,” Marra points out. “Our drivers not only deliver the product, they work the product in the store. Our drivers know after they’ve been servicing a store what type of products sell in that store and what the volume they do is.”

This relieves the stores from having to keep stock on-hand. “When you look at the number of items in a grocery store, there’s no way they can keep back stock of everything that they sell,” Marra emphasizes. “So that’s why it’s easy for them when they just have to buy one case a week and not 50.”

Marra Brothers provides quality service with their drivers writing the orders, delivering, merchandising and rotating the products. Their reputation in the area is in very high standing due to their service policies.

New Products
New products are the lifeblood of the food industry. In 2009 and 2010, kettle corn began melting consumers’ hearts, so Marra Brothers began distributing kettle corn and packaging it under its own label.

Although it sounds like a peanut with a spicy coating, fire-roasted Valencia peanuts actually are roasted in their shells until the shells turn black. “It looks burnt because it’s cooked by fire, and it burns the shell but cooks the peanut inside,” Marra explains. “It has a real different taste to it. People try them and they can’t believe how good they are.”

Melannie Marra Arellano, daughter of Linda and Glen Marra, explains that with the peanut shortage, that side of Marra’s business has slowed somewhat. But the company has found success in introducing non-peanut products, as well.

With the popular demand of glazed pecans, Glen Marra approached his daughter with the idea of glazing walnuts. “We came up with those maybe 10 years ago, and it caught on in the marketplace,” Linda Marra maintains. “Our volume got so big, we had to have somebody do them for us, and now all the big manufacturers do their own.”

Customer requests also are a source of new products. “If they want to change something, they call and ask whether we can do this or that,” Marra says. “So we try and do that, so it is a constant change.”

Independents Days
Marra Brothers distributes within a 150-mile radius in the Bay area and sells to other distributors and food companies that supply restaurants, hotels and inns.

“When we started, there were probably three or four distributors in the Bay area, and actually we only have one serious competitor left,” Marra says. “But where we’ve stayed local, they are now national. I consider ourselves little people. We’re in a little niche because there aren’t many of us who do this.”

Her daughter agrees. “The main emphasis right now, as [I recently discussed] with a new customer I met with and talking to an existing customer yesterday, is local,” Melannie Marra Arellano says.

The company receives its products through brokers from California and other local sources, but for some products – like cashews, pineapples, papaya and other fruit and nuts – international sources in the Philippines, China or Taiwan are used. “A lot of our companies we’ve been dealing with for 30-plus years,” Marra notes.

They do not sell on the internet because they do not want to compete with their retail customers, but they ship some products to the out-of-state homes of visitors to the region.

“Everybody is having a tough time right now,” Marra concedes. “The independent markets have basically suffered with the competition from all these big companies that are almost giving away product. But we deal with a lot of upper-end chains that have a customer base who knows the product and quality that these stores sell. That’s one of the things we’re noted for is the quality of the merchandise that we carry and our fair pricing.”