Back to Profile Gallery > Maverik Inc. 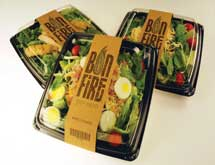 In few industries is this as relevant as it is in retail, especially foodservice. If the product that is being put out is not at a quality that consumers expect, the organization will begin to topple. This is something that is completely understood by Curtis Watson.

At the convenience store corporation Maverik Inc., Watson acts as the executive director of food services, making sure that each Maverik store is selling products that will provide a high experience for the customer. He came up through the organization, beginning 13 years ago when he was hired to manage stores by his father-in-law. “I started out in the stores, so I understand what it takes to get it done at the ground level,” Watson says.

Watson has been around the block at Maverik, getting a solid understanding of the convenience store industry. After running eight stores as an area supervisor along the Wasatch Front in Utah, he became the category manager for pop, beer and cigarettes, and is now six years into his current position, which is interesting because Maverik is not an average convenience store.

“We have a unique foodservice offering,” Watson explains. “We serve hot food offerings on our warmers – including Maverik signature bundles – for breakfast and lunch such as sandwiches, burritos and pizza. On the roller grill, we serve Bahama Mamas, hot dogs and tornados. But the cornerstone of what we do is a fresh condiment center. For customers who like hoagies and hot dogs, it’s got all the fixings that you want.”

Taking on the Competition

There are 212 Maverik locations primarily stretched across the Rocky Mountain region. Currently, Maverik can be found in seven states, but will soon move into Oregon and Washington.

“We added seven stores this year already, and have four or five under construction.” Watson states. “We are always looking at growth areas and opportunities where our concepts will work the best, and increase customer access to our stores in the Rocky Mountain region.”

To separate itself, Maverik does not only look at other convenience stores as competition, but quick-serve restaurants (QSR) and large market pharmacies, as well. “We look at nontraditional competition – CVS, Walgreens, the QSR aspect,” Watson says. “We also consider other markets such as McDonald’s, Burger King – we may not compete with them, but they are there and we share some business.”

Maverik wants to have a strong market reach in the foodservice industry by offering more than just prepackaged snacks and beverages. “We do bake in-store our own French bread,” Watson asserts. “All baking for afternoon and morning menus is done in the store, such as biscuit, muffin and croissant breakfast sandwiches, and the rolls for sandwiches.”

Maverik’s signature items are its bundles. Made fresh each day with fresh ingredients, the company says it is unlike anything a customer has tried before. Essentially, a bundle is a bun baked and stuffed with food items. For breakfast, bundles are filled with egg and cheese and the customers’ choice of steak, sausage, bacon or ham. For lunch or dinner, customers can have cordon bleu, chicken parmesan, steak and cheese, and cheeseburger bundles.

With several QSRs offering value menus, Maverik unveiled its “bundle your bundle” campaign. “You can combine your bundle with a 44-ounce drink for a buck, or California Chips for a buck,” Watson says.

“We are all about the fresh aspect,” Watson declares. Maverik is expanding on this by adding more refrigerator space to its stores, providing customers a selection of made fresh daily salads.

“We introduced making your own salad, and are bringing in the components to make them in all stores,” Watson says, noting that the company is partnering with a local company to make fresh dressings for the stores.

These moves will continue to allow Maverik to gain ground in the foodservice industry and offer customers competitive values with tasty and healthy options. And Watson is quick to point out that value for customers equals value for Maverik.

“When we do quality foodservice operations in the stores, labor and the number of employees increase, offering additional employment for the community,” he says. “That makes a difference in the smaller communities where we operate stores. It’s a new format that we’re doing, very centered around foodservice, and what we see coming out of it is incredible.”