Back to Profile Gallery > McCraith Beverages 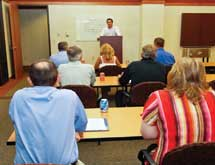 In January 1971, McCraith Beverages began operations as a beer distributor in Utica, N.Y. A family business, Daniel J. McCraith led the company with his son Tom at his side, and later his daughter Susan. “We did pretty much everything by ourselves,” Tom McCraith says. “We started with eight employees and three were family members.”

However, nearly 40 years later, McCraith has grown to approximately 125 employees, but it still has a family atmosphere. Tom McCraith is the president, while his father – at 84 years old – continues to come in every day. Tom’s sons, Chad and Dan, are actively involved in manager positions, and his sister Susan is vice president, handling human resources and accounting.

“Being a family, it has allowed close relationships with employees and sets a tone and example with them,” Tom McCraith says. “We lead by example, that is what employees look for and respect.”

As Chad McCraith points out, “Being a family owned business encourages and advances our entrepreneurial spirits, while constantly challenging us to seek new opportunities.”

In addition to the company’s employees, Tom McCraith says McCraith Beverages’ success and achievements would not have been possible without the commitment and support of its breweries and suppliers. “Many distributors would not be here today if it was not for our suppliers,” he states.

McCraith Beverages is located in central New York in New York Mills. Along with beer, it distributes soft drinks, tea and water in a seven-county area more than 7,500 square miles. The company operates out of an 85,000-square-foot warehouse and office space with 33 delivery trucks and six event trailers.

It is a big change from the original company, but Tom McCraith says McCraith Beverages knew what it would take to grow from the start. “From the get-go, we recognized that superior customer service was something we could give that competitors didn’t,” he explains. “We continued to grow through the years, and the harder we worked, the luckier we got.”

McCraith mentions that the company began to sell more than a million cases a year of Old Milwaukee for 15 years straight. “We focused on that brand and created an identity for ourselves,” he says.

In 1989, McCraith Beverages acquired the distribution rights of local powerhouse brewer FX Matt, and five years later was assigned Labatt USA brands, which it grew 11-fold in eight years. “We purchased a neighboring distributor in 1991 and another in 1994 where we picked up three additional counties,” McCraith says. “Then, in 1995, we partnered with Polar Beverage to distribute Polar and Cadburry brands in all seven of our counties. This partnership launched us into existence in the CSD [carbonated soft drink] and new age beverage business.”

McCraith Beverages continues to grow and evolve with the acquisition of new brands that fit and will add value to its portfolio. Its services include delivery, merchandising, local marketing, brand building and consultant support for its suppliers and 1,400 customers. At its facility, the company has on-site recycling, mechanics garage, truck wash and railroad access.

“Our facility is important to us because it’s a reflection of how we do business,” Chad McCraith explains. “A safe and efficiently run facility increases productivity and keeps employees feeling good about where they work.”

Tom McCraith adds that how the company maintains its facilities shows the respect it has for its business. “We are a reflection on the brands that we represent, whether that is in house or on the road,” he says.

“We also focus on staying ahead of change,” Tom McCraith says. “We are constantly updating training of employees to provide the best customer service for our customers, and the most talented team to represent us and our suppliers.”

The McCraiths agree that it is the company’s dedicated and loyal employees that have helped the company get to where it is today. “Their continued efforts will us to succeed,” Tom McCraith says. “We encourage them to take ownership of everything they do.”

The company believes clients can trust working with McCraith Beverages because it is consistent with its service. “We provide consistent world class service day in and day out,” Chad McCraith says. “If we can help our customers grow their business, it will in turn grow our business. It’s the foundation of a true partnership.”

Tom McCraith says it is a great industry to be in. “There are not many like it – we’ve been very fortunate with our success and the brands that we’ve acquired through the years,” he says. “We are selling the same product as our competitors, the only thing that can differentiate us is our customer service, and, really, that’s what separates us.”

If he was not told, Tom McCraith says he would not know that McCraith Beverages is in its 40th year in the beer distribution industry.

“I wouldn’t know it was 40 years – I don’t know what that means,” Tom McCraith explains. “It is probably the same as 38 and 39, we work hard and deliver to our customers.”

“I sometimes reflect back to the beginning, how we got here, and the time has gone by too fast,” he continues. “But it is more important to be focused on the present and have a game plan for the future.”

The future appears to be bright for McCraith Beverages. Neither Tom nor Chad McCraith see the company slowing down anytime soon, and both  believe they have the foundation to continue to have success.

“We feel comfortable with our game plan,” Tom McCraith says. “We are being very consistent with our service. We want to be the go-to distributor.”

Again, Chad McCraith notes the strength the company has in its employees. “We have dedicated and loyal employees that helped get us to where we are today,” he says. “We set high standards for employees, which are met, and has enabled us to grow the last few years.”

The level of dedication runs throughout the company. To prove this point, Chad McCraith offers, “My father is still on the phone making calls and in front of customers doing sales.”

According to the McCraiths, the company is a standard beer distributor, but one that is committed to its employees and customer service.

“We’ve always looked at it, or at least to me, as simply competing,” Tom McCraith states.

“From when my father and grandfather started the company, the culture was established, and we put pressure on the competition,” Chad McCraith adds. “Why should clients choose us? We focus on over delivering on service and providing value and expertise.”