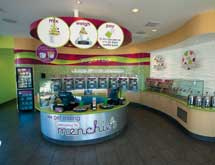 The Menchie’s Frozen Yogurt story may not yet have decades of history behind it, but it does illustrate how quality products, exceptional service and a strong business model can drive growth and success. The Menchie’s experience began in 2007 with the opening of its first location in suburban Los Angeles. Around the world today, the organization has more than 300 locations and more than 250 stores in development.

From the beginning, the Menchie’s approach has been to offer guests a strong selection of flavors in a unique and comfortable setting that is staffed by a team that care about customer service. This approach served the first store well, and in 2008 Menchie’s began franchising. Since that time, it has become one of the fastest-growing food franchises, and the frozen yogurt category leader.

“In just five years of franchising, we have opened hundreds of stores around the United States and the world,” CEO Amit Kleinberger says. “We are now serving smiles in 40 U.S. states and 10 countries, with no plans of slowing down our expansion efforts.”

Strong Concept
Despite beginning its franchising odyssey in the midst of domestic and global economic chaos, Menchie’s has grown at an impressive rate. A key factor to this growth has been the franchisee selection process. Kleinberger says Menchie’s chooses franchisee partners based on what he calls the “be, know, do model.”

“Our franchisees must be people who want the world to be a better place,” he says. “They don’t need any specific previous business background, as we will teach them everything they need to know about running their very own Menchie’s store. Most importantly, it’s about making people smile, and our franchisees deliver on that commitment every day in all of our stores.”

Kleinberger believes the fact that the organization could grow while the economy was down is proof that having a strong concept and approach to business can succeed in any market condition. “We have the right model, value-set and culture,” he says. “Our mission statement is ‘We make you smile,’ and everything we do stems from our desire to fulfill that commitment.”

Kleinberger believes Menchie’s succeeds because it has created a product line that is unique and different, and that the company has a compelling brand personality. “The Menchie’s experience is different from other frozen yogurt chains, as we focus on the why before we focus on the what,” he says. “We create a positive environment that stems from placing community before commerce.”

Menchie’s runs a quality assurance program that ensures brand system standards are maintained in all locations. As for education, the company has strong internal systems that help educate franchise owners and employees on how to operate the business.

“Through a combination of education and quality assurance, you can teach people why consistency is key to success,” Kleinberger says. “After you do that, they will want to do the work and deliver on the Menchie’s smile commitment.”

Something Unique
Menchie’s is focused on making sure its frozen yogurt treats are not seen as commodities. Part of that effort is accomplished through the selection of quality ingredients. The company aspires to be as natural as possible in its ingredient selection. Its proprietary collection of frozen yogurt is made from the milk of California cows, which are not injected with artificial hormones. All of its frozen yogurt is certified by the National Yogurt Association and has received the Live and Active Culture seal, indicating it is real yogurt.

The next part is determining what flavors to offer. Kleinberger says the Menchie’s menu strives to achieve a balance between what he calls “classic, midrange and cutting-edge” flavors. Classics are staples like chocolate, vanilla and red velvet. Midrange are interesting flavors that aren’t uncommon, but something that guests may not see everywhere on a regular basis. The cutting-edge flavors are highly innovative ideas that Menchie’s develops to appeal to guests looking to try something new.

“We have our own in-house lab and a great R&D department with an unmatched team of flavorologists who can formulate a quality flavor and make sure we are always ahead of the curve,” Kleinberger says.

One of the most recent examples of Menchie’s penchant for innovation is its new Pop-arazzi Popcorn flavor. It is an exclusive, proprietary flavor that replicates the movie theater popcorn experience, designed to balance sweet and salty alongside a slightly buttery taste.

Another part of menu evolution is through trend analysis. A major part of this is through listening to guest feedback in stores and online. The company spends a great deal of time examining industry trends as well as individual store-level insights and trends.

“You have to know what is in and out in the restaurant industry to be able to adapt,” Kleinberger says. “Additionally, if you don’t know how to listen to your guests, you won’t prevail.”

Kleinberger believes Menchie’s is in position to be the global leader in the frozen yogurt space as the company that defines the market. He expects many smaller brands won’t survive. By the end of the decade, Kleinberger predicts that Menchie’s will set the tone for the market on a worldwide basis.

“Today, we already celebrate being the largest self-serve frozen yogurt company in the world,” he says. “We are hoping that by end of the year we will have 400 locations, so we are looking forward and we plan to keep celebrating smiles.”