Michigan State University’s Culinary Services department offers more than just meals to students on the East Lansing, Mich., campus. The department’s physical and culinary offerings help to further the university’s mission of preparing students for the professional world by giving them a sense of community as well as something to eat.

“Feeling a sense of belonging can contribute to student success; we want students to be successful in and out of the classroom, and once they graduate and start their career we want them to be comfortable in what they do,” Executive Director of Culinary Services Guy Procopio says.

The department formed in 2008 following the combination of the university’s retail services and residential dining functions. During the re-organization, Procopio – who was named head of the new department – was tasked with creating an integrated operation that kept student success at the forefront. “We’re about more than just great food – we want to provide spaces that promote student success and help build community,” he says. 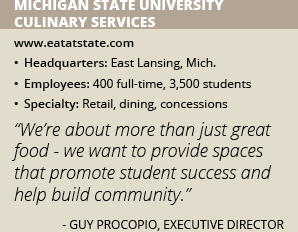 MSU Culinary Services’ retail food services include Sparty’s, an on-campus convenience store concept with 21 locations; two campus food courts, one of which is self-operated with the department’s own self-branded concepts while the other includes a corporate-owned Panda Express, a Subway franchise and a location for Woody’s Oasis, a local Mediterranean-style eatery; beverage and vending services and a food truck. The department also operates two Starbuck’s Coffee franchises as well as the concessions for on-campus athletic facilities.

MSU Culinary Services also includes a support services division. Support services operates Spartan Linen Services, which cleans and handles the linens used by the department as well as the uniforms worn by campus hotel, catering and physical plant employees as well as medical school students. The support team also includes the MSU Bakery that makes items fresh six days a week, as well as a purchasing and warehouse staff that handles $36 million in annual food purchases.

Integrated Offerings
One of Procopio’s first actions as head of the department was to give students greater access to dining options by integrating its retail and dining functions.

MSU’s Combo-X-Change program, introduced in 2009, allows students with a dining plan to get three items – a beverage, snack and entrée – once a day from Sparty’s and other retail locations Monday through Friday in place of a dining hall meal. The program offers a convenient meal option for students who are too busy between classes to go to one of the dining halls, Procopio notes.

The department continues to add new offerings to the Sparty’s brand. Several of these offerings come from a central commissary added to the campus two years ago. The commissary prepares and packages salads as well as prepared items that can be reheated by students or faculty members. In addition to these items, vendor Sushi With Gusto prepares fresh sushi in the commissary each morning that is delivered to retail locations, Procopio adds.

Since combining the retail and dining functions, the department has increased its retail sales from $4,500 annually to $14 million. The added size and scale of MSU Culinary Services’ operations also greatly enhances its purchasing power, as it purchased roughly 60 percent of its goods directly from manufacturers. The department also has supply agreements with major distributors including Sysco, US Foods and Gordon Food Service.

‘Destination Dining’
MSU Culinary Services’ retail rebranding was followed quickly by an overhaul of its residential dining program. The department’s dining master plan, initiated in 2010, included closing two halls and completing $140 million in renovations to its remaining facilities. Renovations were completed in 2014.

“When we were planning the renovations, we saw that even though we were serving great food, it was in an environment that was very dated,” Procopio says. “You can have great food on the center of your plate, but if you’re eating in a dark room, it doesn’t make for a good experience.”

In addition to the renovations, the dining halls extended their hours to 7 a.m. to midnight daily, and each dining hall began offering a distinct menu. For example, one of the halls, dubbed “The Edge,” includes a Tandoori oven offering authentic Indian and global fare. Dishes are planned and prepared in part by the university’s staff of 16 professional chefs.

“We call this ‘destination dining,’” Procopio says. “We have created different experiences in our nine dining halls because we wanted students to have the opportunity to experience foods from different cultures. We want to break up the boredom of students who dine with us every day.”

MSU Culinary Services in recent years has added a number of dietary options for students with allergies as well as students with faith-based diets. This includes designating two sites as nut and peanut allergy friendly zones, where peanuts and tree nuts are not served in any meal. “All of our full-time employees, including myself, go through a food management certification and allergen training program,” he adds. The university also offers kosher and halal options.

The department’s plans include expanding its concession offerings in the Breslin Student Events Center, a multipurpose athletic and events space now being renovated. Expansion plans include adding ranges, flattop grills and other equipment to several concession stands, which will allow the preparation of new and different food items. “In the past, we’ve been limited in our preparation methods at concessions, such as only being able to boil hot dogs and bake pizza on site,” Procopio says. “Now, we’ll be able to offer a more complex menu.” Additionally, a sous chef will be joining the concession team to oversee the menu offerings. Renovations are slated for completion in August.

The department in 2017 will also open a 5,000-square-foot urban market near a new student apartment complex. The marketplace concept will provide a full offering of products including produce, meats, dairy and specialty items. A deli and grill will offer customers salads, sides and hot and cold entrée selections. The Combo-X-Change program will also be available for students to utilize. “We haven’t attempted anything at this size or scale before,” he adds.

Procopio called the new concept an exciting venture for the MSU Culinary Services department. “Developing a grocery store concept has new and different challenges than we’ve encountered previously with our convenience stores,” he says. “Special project teams within the division have come together to offer their expertise and ensure this is a successful venture. When we open next August, we anticipate serving students and staff as well as community members who live nearby.”

Good Stewards
Michigan State University Culinary Services is committed to reducing its impact on the environment. “We have a very aggressive sustainability program on campus,” Executive Director of Culinary Services Guy Procopio says.

The department’s sustainability efforts include partnering with a student organic farming community that grows vegetables used in dishes served in MSU’s dining halls. The university’s dining halls and retail locations also compost 90 percent of the food waste it produces, and purchase from local growers as often as possible, he adds.