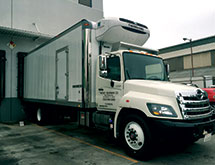 Mickey Bearman has a history of positioning foodservice distribution companies for success since the late 1960s, and that tradition continues today with the Mickey Bearman Co. Thanks to the reputation of the company’s namesake, Mickey Bearman Co. has become a leading rib distributor on the West Coast with significant growth opportunities.

Although the company is well positioned to increase its size, Bearman would like to bring someone in and grow the company together. “It’s an outstanding company and we do very well,” he says.

Since 1982, the Los Angeles-based company has specialized in the distribution of pork, beef, poultry and seafood to barbecue restaurants, barbecue-style restaurants and other restaurants that use protein products specifically for their barbecue menu items. “We found a real niche in this business,” Bearman says. “What really separates us is our cost of doing business. We keep our expenses very low.”

Mickey Bearman Co. sells its protein products on the West Coast, to Hawaii and overseas. It operates out of a public warehouse with no contingent liabilities and leased trucks.“We are 99.9 percent liquid and don’t own a thing. We don’t own anything with the exception of our inventory,” Bearman says.

A Tight Ship
Mickey Bearman Co. is run lean without all the extra departments that drive up cost, Bearman says. Not counting the warehouse staff, the company has nine employees including Bearman. “If the industry knew our average dollars per delivery combined with the few number of items per delivery they might not believe it,” he adds.

Because he is satisfied with the size of the company, there is no salesforce actively seeking new business. “We could double or triple the business right now if we wanted to,” Bearman estimates. “We gain new customers mostly by word of mouth. There are potential customers who call us on a regular basis, but we really do not aggressively solicit new accounts. Our email, ribchoice@sbcglobal.net, best describes who we are.”

One of the ways the company operates so efficiently and keeps its costs down is by its supplier relationships. Mickey Bearman Co. has built long-term relationships over the past 33 years with Tyson Foods, JBS-Swift, Excel, Seaboard Farms, Amity and others.

Historical Footprint
Bearman got his real start in the industry in 1968 when he opened a distribution company in Saint Paul, Minn., called United Food Service Supply, which he later sold to CFS Continental. “We were the first really one-stop distributor in the United States, putting everything on one truck from meat, produce and groceries to paper products and detergents,” Bearman explains. “At the time, CFS Continental was the largest foodservice distributor in the U.S. CFS saw United Food Service as the wave of the future.”

Bearman moved to Los Angeles with CFS in 1973 and headed up the company’s corporate purchasing department. He left CFS in 1978 to start something new once more.

Sometime in 1981, during a visit back home to Minneapolis- St. Paul, Minn., Bearman visited two old friends who had started a company called Lloyd’s Rib’s. Bearman represented Lloyd’s for a couple of years and saw an opportunity in the food service barbecue market.

In 1982, he opened the Mickey Bearman Co., which began to sell products to the barbecue market segment.

“The company grew and in 1986, was becoming much larger and needed to produce its own products,” Bearman remembers. That year, Bearman and partners formed Curly’s Foods.

Curly’s Foods supplied the Mickey Bearman Co. with cooked and raw products in addition to what the company bought from major packers. Over the years, Curly’s Foods became a major producer of products for the barbecue industry on a national scale.

In 1997, Curly’s Foods was sold to Smithfield Foods and Bearman kept his distribution company in Los Angeles.