Back to Profile Gallery > Mid-South Distributing 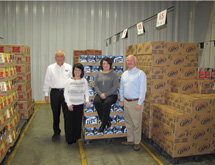 There are many beer distributors, but Mid-South Distributing sets itself apart from the rest through its products and a passion for the business, CEO Rick Gerwe says. “This company has only two real assets: the brands we sell and the people that do it,” he says. “Our people know how to work.”

He and his father, Maury Gerwe, formed the firm in 1978 after a three-year search for a beer distributorship. Previously, Rick Gerwe was a sales executive with Mead Corp., and his father was a commercial realtor before deciding they wanted to move into the beer industry.

From 1976 to 1978, the two visited distributors in six states before purchasing Mid-South Beer Co. in Shelbyville, Tenn. At that time, Rick Gerwe says, the firm operated out of two small garages that sold 285,000 cases of beer for the Miller Brewing Co.

Today, Mid-South’s operations are based in its modern, temperature-controlled warehouse in Tullahoma, which covers 50,000 square feet. The company now distributes to 14 counties in middle Tennessee with a volume of nearly 1.7 million cases.

In addition to alcohol products, the company has a non-alcoholic division, which was formed approximately 15 years ago with Snapple beverages and bottled water. Today, Gerwe says, the division distributes brands such as Red Bull, Nestlé Waters North America, Nestea and Crystal Geyser Natural Alpine Spring Water.

Staff Focused
Mid-South’s focus on its employees has allowed it to enjoy a low turnover rate. “Almost half of the current employees have 10 to 20 years with the company, yet are only middle aged at this time,” Gerwe says.

King notes that Levi and Nichols’ experience, passion, product knowledge and dedication has made them essential to the ongoing success of the company.

In addition, Mid-South’s team also continues to include members of Gerwe’s family. His father died in 1979, but his daughters, Vice President of Sales Support Molly King and Vice President of Administration Jodi Bradford, are employed in the family business today.

“We try to make it a very enjoyable environment,” Gerwe says, noting that the company rewards its employees when they do good work. “You only keep [longtime employees] if you take care of them. We try to make it fun.”

Leading the Market
Mid-South has established itself as the market leader within the craft beer segment, Gerwe says. Currently, the company’s sales staff includes six employees who are all trained in the Cicerone Certification program. This accreditation makes them experts in beer flavors and styles. Additionally, the company distributes many craft brands, including Samuel Adams and Sierra Nevada Brewing Co.

Craft beer is now the most popular trend in the industry, Gerwe adds. Although craft beers only comprise 5 percent of Mid-South’s business, it is a still significant segment. “Most of the [new SKUs] that come in have to do with craft beers,” he says. “It’s going to grow extensively.”

A Healthy Industry
Mid-South also plans for growth of its own with a new company: Quality Brands Inc., which will be based in Murfreesboro, Tenn. “This company will distribute wine, distilled spirits and high-alcohol beers in their existing market,” Gerwe explains.

He adds that Mid-South hopes for a bright future. “Nothing’s guaranteed in life, [but] the beer industry, we feel, is very healthy,” he says. “We’re very much part of that in our community. Hopefully, that will last for a long time.”