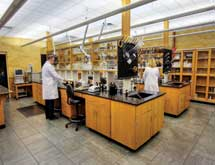 For many consumers, the deciding factor in whether or not to eat a food again is its flavor. If the food has a flavor that meets with the approval of one’s taste buds, they will likely return to it again. And that approval is the focus of the business at Mother Murphy’s Laboratories. Based in Greensboro, N.C., the company has more than 5,000 flavor formulations that it provides to multiple industries, part owner David Murphy says.

Mother Murphy’s was formed from the partnership of Dr. Richard Stelling and one of his patients, Kermit L. Murphy Sr., who is also David Murphy’s father. Stelling, who previously had sold food flavorings at George State University, formed the part­­nership with M­urphy in 1946. The two began by selling flavors to local bakeries. They eventually expanded their customer base to include the U.S. military.

Today, Mother Murphy’s employs a staff of 88 and provides flavors for the cereal, ice cream, beverage, alcohol, tobacco and pet food industries, David Murphy says. “We do all different types of flavors,” he says.

A longtime veteran of Mother Murphy’s, David Murphy joined his family’s company after graduating from college. “I went to the Dunwitty Baking School for six months,” he recalls, adding that this was followed by another two months of training.

“After two years, they put me out in sales in Texas,” he recalls, adding that he has enjoyed his time at Mother Murphy’s. “The food industry is a pretty wholesome industry. Something’s new [here] every day.”

He also has enjoyed working alongside the company’s staff. “We’ve got the best people we’ve ever had,” he says. “Most of the people in the food business are the hardest working.”

This includes members of Murphy’s family who represent the third generation to join the business. With their ownership in the company, family members have been sales and market driven, Murphy says. This has led to associates talking directly to the customer to determine their needs.

“That’s been key to keeping the company going,” Murphy says. “[The family is] in sales, [and] they’re on the boards of directors. They get ideas on how to improve what we’ve done.”

Murphy notes that the third generation is pushing the company to automate its mobile devices so it can be more responsive to customers. In addition, it has helped update the company’s marketing materials for trade shows and ads.

On the Up and Up

This year marks Mother Murphy’s 65th anniversary, and the company has celebrated it with the opening of a new 95,000-square-fo­ot warehouse in Greens­­­­boro. With the new warehouse, Murphy says the company can store more finished goods and raw materials, allowing it to respond quicker to its customers’ short lead times.

Although 2010 was the company’s best year so far, 2011 is off to a faster start. Murphy says Mother Murphy’s sales already have increased compared to last year. He notes that it is picking up additional customers that like its pricing structure and world-class customer service.

Murphy says he also sees more opportunities ahead for Mother Murphy’s. “There is a lot of work,” he states. “We’re trying to make better-for-you functional foods.”

A common problem with “better-for-you” foods is that their flavors are less than desirable. “They might be good for you, but they do not taste good,” he says. “It gives a lot of opportunities for people to mask some of the flavors.

“Taste is a signature of most of the items out there,” he says. “I don’t see anything but bright things in the future.”