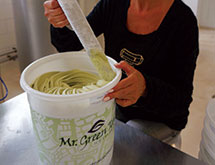 For many years, Mr. Green Tea Ice Cream packaged its frozen desserts in the same kind of unidentifiable 2.5-gallon cardboard container its competitors used. The company sold directly to restaurants in the New York City Tri-State area and its low public visibility meant Mr. Green Tea had no marketing recognition.

Then, six years ago, Vice President Michael Emanuele realized his family’s company needed a brand identity if it was going to grow and he saw new packaging as the solution. Mr. Green Tea introduced resealable plastic containers with the company’s logo laser-printed right onto the package and everything began to change.

“It was a really different approach to foodservice packaging,” Emanuele says. “The Mr. Green Tea brand name was getting out onto the street.” Soon, the discarded containers began popping up in unexpected places. “Before you know it, we’re seeing these [containers] used as ice buckets in Hoboken,” Emanuele says. “The container is sticking around and our logo is sticking around.”

Diners soon learned the desserts they enjoyed in New York City’s top Japanese restaurants could also be found at the small eatery down the block. Such recognition propelled demand for Mr. Green Tea and the company’s ice creams have become the ultimate Asian dessert in the market. “Now you can’t walk into an Asian restraint in the Tri-State area without seeing one of these tubs as a cigarette butt collector,” Emanuele says. But the decision to change packaging was more than a marketing move as it signaled the start of a transformation for Mr. Green Tea.

Operational Transition
Michael Emanuele’s grandfather, Santo Emanuele, formed Mr. Green Tea in Brooklyn in 1968. The sushi craze had made its way from the West Coast to New York and, as a veteran of the dairy industry, Santo Emanuele recognized the need for traditional ice creams for Japanese restaurants. He developed three signature flavors – green tea, red bean and ginger – and began selling directly to Asian establishments in the area.

Rich Emanuele, Michael Emanuele’s father, took over the business and in 2002 moved the operation to Manalapan, N.J., then relocated again in 2008 to Keyport, N.J. Mr. Green Tea developed the flavors, but had to maintain partnerships with co-packers to actually produce the ice cream. “It was really a fight to simply produce what our customers were asking for,” Michael Emanuele says of relying on co-packers.

When Michael Emanuele joined his family’s company in 2009, he and his father agreed that for Mr. Green Tea to grow it needed to control its own production. In 2013, the company was featured on an episode of CNBC’s “The Profit” and received an investment from host Marcus Lemonis to build its own factory. The family chose a site in Keyport that had been badly damaged by Hurricane Sandy in 2012. Nearly the entire building save for the foundation and concrete walls was torn down. Michael and Rich Emanuele, who both have engineering backgrounds, designed the new factory and served as their own general contractors. The facility opened last December, giving Mr. Green Tea the capability to produce half-a-million gallons, equal to 4.2 million pounds, of ice cream each year.

Mr. Green Tea still uses some co-packers to make its mochi ice cream, a dessert that features a dumpling of ice cream that is wrapped in a sweet rice dough. But the factory now allows the company to handle almost its entire operation. Research and development, the processing of ingredients, packaging design and sourcing for the supply chain are all done in-house. “Though it may take us longer to come to market on some products, it gives us full control,” Emanuele says. “It allows us to tailor-make every product and distribute it directly to the customer.

“The factory gives us agility,” he adds, “[and] the ability to pursue new avenues in the industry as opportunities become available.”

Natural Sources
Many manufacturers in the industry may claim to have an all-natural product, but Mr. Green Tea actually delivers on that promise. The company forgoes using syrups for flavoring; instead, all Mr. Green Tea is made using actual food. The green tea ice cream is a blend of teas from five different countries, the ginger is flavored with a ginger root imported from Australia and the chai comes directly from India. All the milk and cream Mr. Green Tea uses are sourced from free-range and artificial hormone-free cows from Pennsylvania and New York dairy farms. “These are things you can taste,” Emanuele says. “We don’t do it to be cool.”

That commitment to natural ingredients is how Mr. Green Tea has built its reputation. “It just shows you don’t have to be a tiny, little artisan in a garage somewhere to produce quality foods.”

The company offers 16 ice cream varieties in foodservice and another nine flavors of mocha. At retail, Mr. Green Tea has five flavors and will soon launch a sixth: black sesame.

Restaurants remain the bulk of Mr. Green Tea’s business, making up 85 percent of revenues last year. Emanuele takes pride in delivering a premium product that can sit alongside the best meals in the country. “You’re talking about one of the most cutthroat businesses in the world,” he says, pointing out that dessert is the last thing a diner eats before leaving the tip. “The dessert has to live up to the chef’s incredible plate he made that day.”

Eyes Ahead
Although restaurants remain the primary business, much of Mr. Green Tea’s growth is coming from store sales. The mission is to provide a completely different option in the freezer section.

Already, there are signs of success as retail now makes up 15 percent of the business, up from 5 percent the year before. Mr. Green Tea can be found at ShopRite, Stop & Shop, Kings, King Kullen and Whole Food stores and a partnership with Mariano’s grocery stores has allowed the ice cream to enter the Chicago market, further driving retail sales. The company also sells its ice cream through its website to all 48 contiguous states. Internationally, Emanuele is watching the booming dairy industry in China and the Middle East for possible expansion.

“Our goal isn’t a billion dollars,” Emanuele says. “Our goal is to produce our products and get them to the top-50 cities that will appreciate them.”