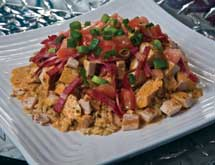 A decade ago, the words “healthy eating” would make some people wince because it immediately brought to mind images of bland tofu, sprouts and chalky protein bars. But even with those preconceived notions standing against it, the owners of Muscle Maker Grill have managed to build a thriving business that gives healthy eating a new definition.

“Our greatest challenge is to get people to recognize that you can eat great food that tastes great and doesn’t kill you,” says Rod Silva, founder and CEO of Muscle Maker Grill headquartered in Colonia, N.J. “Our healthcare system is so expensive because people don’t take care of themselves. People think eating healthy too expensive, too inconvenient and that healthy food doesn’t taste good. Well, we have something that’s affordable, easy, tastes great and is convenient.”

In recent years, however, that PR challenge has lessened considerably. The combination of people trying to get healthy or stay healthy – coupled with Muscle Maker Grill’s steady growth and media attention on outlets such as Fox News, CNN, MSNBC, Wall Street Journal, food blogs and MTV’s Jersey Shore – has garnered great interest for the quick-service restaurant chain.

Today, it owns one restaurant and supports 67 franchises located throughout the country. Muscle Maker Grill has 25 more franchises under construction and contract agreements to build another 200. The company has landed on fastest-growing franchise lists and it all started with a smoothie shop in 1995.

How it All Began
At the age of 23, Silva opened a small New Jersey shop selling smoothies and nutrition supplements. Customers who caught a whiff of the healthy but tasty food Silva prepared for his own lunch asked if he could do the same for them. Silva began taking food genres – some of his own favorites – such as Italian, Mexican, Tex-Mex, Cajun and American and developing healthier versions of familiar fare.

“I made foods that I and other people looking for healthy options would love to eat,” Silva says. “We can make the classic bacon cheeseburger, but we might do it with turkey bacon, whole grain bread, reduced-fat cheese and a leaner meat. People love the flavor of our food, but the fact that it doesn’t come with all the guilt.”

Silva developed a menu where all of it – not a specially designated corner of it – is healthy. And just as his passion for good, healthy food caught the attention of customers in his smoothie shop, it also caught the attention of a former president of Pizza Hut and Silva’s business partner, Arthur Gunther. A mutual friend at Silva’s church introduced the two, and Gunther brought his franchising expertise to take Muscle Maker Grill to the masses.

Controlling Costs
With a steadily growing business, Silva says the key is to maintain the Muscle Maker Grill standard state to state while keeping costs under control. With the public demanding more natural and healthy options, many restaurants are scrambling to give customers what they want. Because Muscle Maker Grill markets itself as healthy food chain, Silva says it doesn’t have the luxury of deep friers to make its food appetizing. It has to use real food and no gimmicks, and that can get very expensive.

At Muscle Maker Grill, however, the company’s management team has already developed a foolproof formula for a successful healthy food chain, giving it the higher ground over competitors.

“We try to make sure our food costs stay at 30 percent,” Silva says. “We use real food – grass-fed beef, all-natural chicken, whole wheat pasta – but we’ve been able to source good ingredients and keep costs down.”

Muscle Maker Grill has worked with one food vendor, Sysco Foods, since the chain began. Its loyalty and track record with the company have led to even more competitive pricing as the franchising operation has grown. In 2008, when many franchises began to downsize, Muscle Maker Grill continued to grow, prompting its preferred vendor to place larger bets on this winning horse.

In addition to leveraging its growth to get better pricing, Muscle Maker Grill also practices portion control. Recipes are developed to exacting standards, which creates predictability in supply chain costs. Also, to take the guesswork out for franchisees, Sysco and Muscle Maker Grill set up an online system in which operators purchase from a Muscle Maker Grill-approved list – creating consistency across the country. It’s just one of the many supports that Muscle Maker Grill gives to its franchisees.

To prepare new franchisees for opening day, the company has prepared a 60-day countdown that breaks down all the steps from A to Z and when to complete them. Muscle Maker Grill walks with them the whole way and operators are trained by corporate staff, some who were there when Silva opened his first restaurant.

Muscle Maker Grill is currently open in 11 states and the team is currently working with operators to build out the Philadelphia, Long Island, Connecticut and Illinois markets. It’s also spreading west into states such as Colorado and California. Silva is looking to open locations on military bases and has received inquiries from international investors in the Middle East, Australia and Canada – countries that Silva says have been on the healthy-eating front for some time.

It’s also expanding its menu. In addition to healthy wraps — many topped with the restaurant’s zero-carb signature sauce – salads, power pastas, guiltless entrees served over brown rice and low-carb solutions, the company is developing a healthy pizza option. The food is in line with Muscle Maker Grill’s philosophy of taking familiar foods and translating it into a healthy option. The company will test it in the Pittsburgh market before rolling it out to other locations.

“Real food is coming back,” Silva says. “People are tired of processed, unhealthy food that leaves you not satisfied. Customers are looking for quality food options served by friendly faces that offer good service. If you treat customers with respect, appreciate their needs and requests, and provide a good meal, the food will sell itself and you are sure to be successful.”