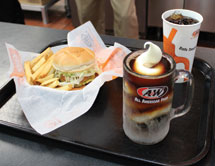 One of the largest restaurant franchise owners in the United States has plans to continue growing throughout 2012. Founded in 2003 by President and CEO Jim Bodenstedt with the acquisition of 18 Taco Bell and KFC restaurants in Texas, San Antonio-based MUY Brands, LLC today is one of the top 10 franchisees for Yum! Brands – the owners of Taco Bell, Pizza Hut and KFC – and among the top 20 franchise companies in the nation.

The company plans to open 12 additional locations this year, supplementing its existing 230 locations in Texas and New Mexico. More than half of MUY’s restaurants are Pizza Hut locations, with the rest consisting of Taco Bell, KFC, Long John Silver’s and A&W units.

These new items, as well as the brands’ familiar offerings, make them a popular quick service destination, especially for those looking for quality meals at low prices.

“With the struggles in the economy, more people have traded into our restaurants from other higher-priced alternatives,” he adds. “The value message we offer really resonates with today’s consumers.”

In addition to offering the menu items its brands are known for nationally, MUY also adjusts its menus and offerings to suit local preferences and tastes. Many of its KFC locations feature buffets, and Pizza Hut offers specialty pizzas including shrimp and pineapple pizzas, Bodenstedt notes. MUY’s new locations will include delivery-only Pizza Hut units as well as 5,000- to 6,000-square-foot Pizza Hut/Wing Street sports bars, which will offer pizza, wings and other items in a setting different from that of typical brand restaurants. “These are meant to be great places to meet, drink and enjoy great Pizza Hut and Wing Street food,” Bodenstedt says.

’The Right Talent’
Bodenstedt credits his executive staff as well as individual store managers with the company’s continued success. “Anyone can buy a restaurant, but managing it successfully is another matter,” he says. “We’ve been able to remain successful because we have the right talent to manage the company.”

“First and foremost, I think our team is good at identifying leaders in the business, whether it’s a new shift manager, a general manager or above,” Bodenstedt says.

One example of the company’s penchant for innovation is its being a completely paperless operation. “Not only has that made us more efficient and friendly to the environment, it’s allowed us to save more than $1 million each year,” he adds.

A Helping Hand
MUY’s leadership and other successes have earned it notice within YUM as well as the quick service industry at large. The company was recently recognized as a “Number One Builder” by KFC and Pizza Hut, and also earned the People Encouraging Talent and Excellence (PETE) award from KFC. The PETE award is named in honor of Pete Harman, KFC’s first franchisee.

KFC employees also earned the “Have A Heart” award from the brand for its community service efforts. Employees at all of MUY’s brands regularly donate their time and money to charity and local organizations.

“We want to help make sure the children of tomorrow have the best opportunities, give people the chance to elevate their education, thank veterans for their service to our country and work to make sure people have quality meals,” Bodenstedt says.