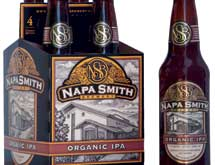 The Napa Valley in California is known the world over for its wines, but it may become as famous for its beer; specifically, the world-class ones brewed at Napa Smith Brewery by well-known veteran craft beer brewmaster Don Barkley. “The end of March was the anniversary of our fifth year of being in business, so we’re obviously very gratified,” President Steve Morgan says. “Many small businesses don’t make it five years. We’re thrilled to not only have survived but to be thriving right now.”

So how did a brewery get established in the Napa Valley? “Napa Smith started in spring 2008 as a winery and brewery, and we still make a small amount of wine,” Morgan relates. “But we really shifted our focus to the beer side of the business. It’s really been the incredibly positive reaction we’ve had from consumers about our beers.”

At Napa Smith, beer is for more than just nuts or pretzels. “We call them ‘brewed for food,’ because we believe a bottle of craft beer should be invited to the dinner table like a bottle of fine wine,” Morgan emphasizes. “So we put food pairings on the back of the bottles. We brew the beers so they are balanced and complex, and as a result of that, those beers go really well with food. As far as we know, we’re the only craft brewery in the U.S. doing this.”

The multiple food pairings suggested on the label of each style of beer are more than just a gimmick. “When our master brewer, Don Barkley, sets out to make each one of these brews, he thinks about how that style of beer will pair best with food, and he accentuates that element in our beer,” Morgan explains.

He emphasizes Barkley’s longevity as a brewer. “Don has literally been doing this continuously for 35 years, and doing it longer than anybody in the craft beer world,” Morgan maintains. “We call him ‘the godfather of craft beer.’ That perspective of having 35 years gives him a breadth of knowledge that very few people have.”

First in Four-packs
Napa Smith beers are distributed in six states and Sweden. “Sweden is now our second-biggest market outside of California,” Morgan relates. “We received a listing with the government monopoly there selecting two beers sold through government stores, and we’re very fortunate we’re very successful. Our biggest seller is the organic IPA.”

Also distributed in Arizona, Colorado, Florida, Tennessee and Georgia, Napa Smith Brewery is licensed to distribute its beer in 22 states, but first it has to ramp up production. “By the middle of this summer, we will have three times the capacity we have right now,” Morgan calculates.

The company’s beers are shipped only in four packs of 12-ounce bottles instead of the traditional six-packs and in single 22-ounce bottles. “As far as I know, we were the first brewery to go exclusively to four-packs,” Morgan declares. “With four-packs, you can bring the price point down a little bit and get a high-quality, hand-made product.” A QR code also is on each four-pack that links smart phones to the company’s informative website.

On-site Sampling
Not to let wine tasting rooms get all the sampling attention, in 2012, Napa Smith opened a tasting room at its brewery where all the beers that currently are available can be sampled. The company has four beers it brews year-round called the Classic Series, a Signature Series of two specialty brews and three beers in the Seasonal series that change with the seasons. These beers also are joined by special releases.

Styles of beer range from pilsners and a wheat beer brewed with fresh ginger to an organic IPA, a beer brewed with grapes and a strongly hopped, oak-aged Imperial IPA. To emphasize the beers’ pairings with food, Napa Smith expects to obtain permission to serve food at the tasting room by summer.

Freshness is crucial, so Napa Smith developed unique technology to preserve its unpasteurized brews until the bottles are opened. Besides the glass used for the bottles that prevents the absorption of ultraviolet rays, a drop of liquid nitrogen sparge is added to each bottle just before capping to force out the oxygen that causes spoilage.

The bottle caps have a special oxygen-scavenging liner that uses the same technology developed to prevent the escape of telltale oxygen bubbles from U.S. submarines that can indicate the sub’s location. “It’s not proprietary, but it is expensive,” Morgan emphasizes. “It adds 25 percent to the cost, and very few companies will spend the extra money for the cap.” No preservatives are used in the beers. Morgan estimates Napa Smith beers will stay fresh for up to six months after bottling.

Although several brewpubs are located in the Napa Valley, Morgan says Napa Smith is the only production microbrewery that bottles its beers and sells them at retail that is located in the valley. Most of the company’s beers are fermented for at least 17 days.

“Everybody who works here loves craft beer, and the passion is really palpable,” Morgan stresses. “A certain kind of grace or dignity to the way you live your life is really embedded in the culture here. So when we came out with the first production beer from Napa, we wanted to capture that essence of what we think the Napa Valley is – with the caveat we are giving people craft beer instead of Cabernet Sauvignon.”