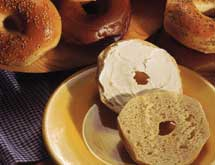 Because of the complexity of their production, bagels are one breakfast item that very few people make at home. There’s a lot of tradition and attention to detail that comes with making a proper bagel, and those are the foundation on which National Choice Bakery has built its success over the past 21 years. As one of the nation’s largest producers of bagels, National Choice Bakery serves nearly every national brand name and many grocery store chains with bagels made the traditional way.

The company explains that its founding was the result of two men with a dream that has become fully realized today. “In 1990, Shimon Harosh and Michel Rouache had a vision – bagels would grow in popularity, and those who concentrated on quality and service would thrive and become industry leaders,” the company says.

With this in mind, the partners teamed up to found Twin City Bagel with the goal of becoming one of the nation’s premier bagel manufacturing facilities and to serve local wholesale and retail operators in the Twin Cities. The company’s focus on making high-quality bagels that were made the traditional way – boiled in water and then hearth-baked – was one of the primary reasons national bakery brands and grocery store chains began to seek out Twin City Bagel to produce their bagels. In 2003, Twin City Bagel changed its name to National Choice Bakery to reflect the company’s new, national profile.

The traditional method of preparing bagels is a big part of the formula for National Choice Bakery’s success. According to this method, a simple dough is shaped into the familiar ring shape, then left to proof at low temperatures. Then, the bagels are boiled in water that may or may not contain additives for flavoring. The bagels are then baked, and the boil-then-bake method is what gives the bagel its trademark consistency – dense and chewy, with a sometimes-crispy exterior.

Even though National Choice Bakery still adheres to the traditional method of baking bagels, its production methods are as modern as can be. For instance, the company’s newest production facility in Pageland, S.C., can produce up to 420 bagels per minute. The main oven is capable of holding between 12,000 and 15,000 bagels in a batch at one time, and a single bagel can be created from start to finish anywhere between 90 and 120 minutes. The majority of this time is spent in the proofing process, as the bagels wait for their yeast to activate.

The filled pancakes are made by forming batter into disks, which are cooked on the company’s series of giant griddles. Then, filling is placed on one and another is flipped on top of it. The filled pancakes are sealed and sometimes stamped with the logo of a grocery store or other customer before they are frozen and packaged. According to the company, the equipment used to make these products was custom-built for National Choice Bakery, and is capable of producing up to 6,000 pancakes an hour.

No less important than the products created at the Pageland facility is the fact that it has brought much-needed jobs to the area, according to National Choice Bakery. More than 50 full-time positions were created when the production facility came online, the company says.