Back to Profile Gallery > National Deli 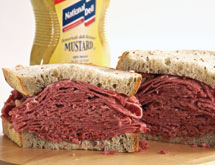 The hot dog is as traditional to baseball and other sports as the seventh-inning stretch, so ballparks know they can’t drop the ball when it comes to serving a hot dog as memorable as the game. National Deli hits a grand slam when its hot dogs are being served in New York City’s Madison Square Garden and Turner Field, home of the Atlanta Braves, as well as being the official hot dog of the Pittsburgh Pirates, the Gwinnett Braves, the San Antonio Spurs and the Miami Heat.

National Deli’s dogs also are having their day at Roger Dean Stadium – home to the Florida Marlins’ and St. Louis Cardinals’ spring training games – and Wet ‘N Wild Orlando, where they are served. The company also produces a complete line of deli meats, including 50 varieties of roast beef, corned beef and pastrami, several types of turkey breast, turkey pastrami, more than 100 different shapes and sizes of premium beef franks, and an extensive selection of prime rib and pot roast that is carefully selected, hand-trimmed and hand-rubbed.

“We produce everything in Miami, from 500,000 to 1 million tons a week, 52 weeks a year,” Executive Vice President Joey Bonomo declares. “As far as corned beef and pastrami, we make it the old-school way the bigger companies don’t produce anymore. We still make authentic pastrami navels. Most people don’t use that cut of meat anymore.”

The company’s two facilities are approximately a mile apart and employ 180 people. The corporate office, distribution and receiving departments are headquartered at the 30,000-square-foot facility the company moved into approximately two-and-a-half years ago.

The manufacturing plant is located at the 55,000-square-foot building that previously housed the entire company before the new facility was occupied. The company’s year-over-year growth has averaged 10 percent. Bonomo estimates approximately 40 percent of the company’s production is private-label for major foodservice companies.

Open Rack
National Deli uses more time-consuming production methods that result in higher quality and better taste. “We open-rack cook our product, which the big guys can’t,” Bonomo maintains. “Open-rack cooking means basically you’re putting it on a rack – it’s not cooked in a bag, for example, where most people cook. Why do big companies cook in a bag? Because when you open-rack cook, you’re not getting the yield, but you’re getting the quality. There’s a lot of cleaning involved in that open-rack cooking.”

Bonomo calculates National Deli consistently spends approximately $2 million annually on new automated production equipment. The company recently added three more ovens to its production lines and a new sealed air bagging system for $800,000. “Ovens or a slicer could run you up to $1 million,” Bonomo says. “We constantly put money in.”

Besides National Deli’s preparation methods, its cuts of meat that it obtains from major packers in the Midwest keep product quality high, Bonomo asserts. Its products are shipped from Miami throughout the United States, including to California, Las Vegas, Texas, New York, Philadelphia and Chicago.

Top Dogs
National Deli produces its premium beef hot dogs with quality ingredients so they occupy the upper tier of their market. “It’s all high-end,” Bonomo says. “You can make a hot dog many different ways. You can make an inexpensive hot dog. We only use trimmings that we produce ourselves – top-round trimmings – so we are high-end.”

The company relies largely on word-of-mouth marketing. “We started in Florida years ago, and then people tasted it in big venues, and basically, the market itself just snowballed,” Bonomo maintains. National Deli was founded in 1984 by Hebrew National, a manufacturer of kosher deli meats, to expand its business.

In 1992, ConAgra Foods wanted to buy Hebrew National, which owned a total of 23 companies. The owner insisted that ConAgra buy all the companies instead of only the ones in which it was most interested, which it did. In 2001, Bonomo and six partners bought National Deli from ConAgra.

National Deli is following trends toward healthier eating and offering products without gluten or monosodium glutamate, and frankfurters with all-natural Angus beef. The company has always been located in Miami.