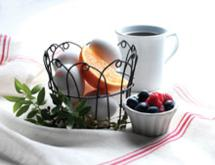 Eggs are universal on most restaurant menus and consumer shopping lists, but a widespread fear of salmonella poisoning has somewhat damaged their reputation or at least hindered their potential for new applications and further growth. Quick-service and fast-casual restaurant chains, for instance, are hesitant to work with raw eggs for fear a salmonella outbreak could be their undoing. If restaurants and consumers were guaranteed a safe egg each and every time, would their fears subside? Greg West, president of National Pasteurized Eggs Inc., thinks so.

“Ultimately, Mother Nature decides which eggs have salmonella,” he says. “Whether a family farm or name-brand egg, there is no guarantee against salmonella unless the eggs are pasteurized. If you have an egg with salmonella, it could be very bad for not only the individual, but also for the operation that served the egg. We want to give peace of mind to all individuals involved with the service of eggs.”

National Pasteurized Eggs uses a patented pasteurization process based on a computer-monitored technology that – through precision temperature and time – destroys salmonella inside and outside of an egg without cooking it. Because all the bacteria are destroyed, the egg has a longer shelf life and maintains farm-fresh taste. Being able to guarantee safety and quality on such a vulnerable commodity has spurred phenomenal growth for the Lansing, Ill.-based company.

Dr. James P. Cox and R.W. Duffy Cox of Lynden, Wash., initiated development of the egg pasteurization process in 1985. In the early 1990s, they were introduced to L. John Davidson, who acquired a license agreement on the technology from the Cox family and formed Pasteurized Egg Corp. The eggs were initially produced in partnership with a large egg producer in the Carolinas and were sold in a few surrounding eastern states.

A 2001 license agreement with National Pasteurized Eggs Inc., an investment group based in the Midwest, enabled Pasteurized Egg Corp. to expand into the central states. However, Davidson and his investors found the early stages of growth and marketing to be too costly and could not achieve profitability. In late 2003, National Pasteurized Eggs Inc. purchased all of the intellectual property rights and launched its brand, Davidson’s Safest Choice, subsequently, relaunching awareness through its new Safe Eggs website and industry education programs. It has averaged 50 percent growth per year thereafter.

Since 2005, the company – which has additional operations in South Dakota with more to come, possibly next year – has been shipping to all states and serves more than 260 foodservice distributors and retail chains across the nation. In late 2009, it launched a line of cage-free eggs, which are selling well and are already used by customers in 40 states. In March, National Pasteurized Eggs celebrated its most exciting milestone yet. “We have pasteurized over a billion eggs through our facilities,” West declares. “That’s a lot of eggs consumed by individuals who otherwise might not have chosen eggs due to concerns of salmonella poisoning.”

National Pasteurized Eggs sources its eggs from family farms in Wisconsin, Michigan, Indiana, Illinois and South Dakota. Its client list has expanded to colleges, universities and hotels. However, in the past three years, the company has seen tremendous growth in quick-service restaurants, West says. “We spend a lot of our marketing dollars on safety and operational education, such as training chain restaurant groups on best practices when using eggs, and we show how using a pasteurized shell egg helps to improve efficiencies while ensuring they avoid violations of food codes,” he explains.

Roughly 90 percent of National Pasteurized Egg’s business is with foodservice clients; the rest is in retail. “Our initial strategy included a conscious choice not to concentrate on retail,” Vice President Jay Berglind says. “Our research and an increase in consumer demand have pulled us into the retail arena. We are launching new retail programs and packaging this June. Media has given consumers a greater awareness and concern about the safety of their food than before.”