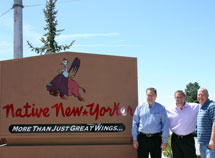 During his days as a student at Arizona State University, Dan Chaon and his friends often found themselves partaking of a 10-cent chicken wing special at their local Native New Yorker restaurant. Today, Chaon is the president and COO leading the Gilbert, Ariz.-based casual dining restaurant franchise through a rebranding meant to both revitalize the company while remaining true to the welcoming atmosphere and tasty food that attracted him to it years ago.

Since joining the company in 2010 following the passing of co-founder Floyd Anderson, Chaon has established a number of initiatives that will further establish it as a leader in its home state and grow it into new markets. There are 20 Native New Yorker locations in Arizona and one in Washington state; 18 of the total 21 locations are franchisee-owned. Anderson’s wife Judy and four daughters remain involved in the company as principals and owners.

“I came on board in 2010, as the family was looking for someone with multiunit franchise leadership experience,” says Chaon, a 22-year veteran of the restaurant industry whose past experience includes executive roles at Brinker International, the owners of the Chili’s franchise. “My mission is to find a way to reinvent the brand.”

The first of Chaon’s initiatives began in 2011 with a company-wide employee training, food quality and consistency initiative that continues into 2012. Another major initiative is the remodeling of all three corporate stores over the last year, with eight to 12 franchise locations projected before the end of 2012. Chaon ultimately hopes to remodel and add new signage to all restaurants in the next 18 to 24 months. Five new locations are also projected to open in 2012, including one in Queen Creek, Ariz., that will serve as a prototype for future locations. “We’re looking at strategic and methodical growth to ensure the Native New Yorker brand and integrity remain in place,” Chaon says.

The 5,500-square-foot Queen Creek restaurant will feature a 600-square-foot patio area, a double-sided fireplace, elevated exterior towers and an extensive audio/visual package. “We want to incorporate a more welcoming and warm look in our restaurants,” Chaon says.

Beyond the Basics
Floyd and Judy Anderson founded their first restaurant in 1978 in Phoenix after relocating from Buffalo, N.Y. After initially struggling to find customers, the couple found success by adding Buffalo-style chicken wings to their menu. Today, Native New Yorker offers 15 different flavors of wings, all of which can be ordered on an individual basis.

“We were the first to market in the wing category in the Arizona market and we have a very loyal following,” Chaon says. “Wings are still the baseline of our menu, but we’ve developed into a full-service casual restaurant that’s not just the ‘coolest place with the hottest wings’ but ‘more than just great wings’ (the company’s motto).”

The restaurant’s wings have won it a number of accolades from customers and local publications including “Reader’s Choice” and “Best of Arizona” awards. Native New Yorker’s other menu offerings include comfort foods including lasagna, baby back ribs and chicken potpie.

“Wings built the business and we’re very proud of that profile, but it’s important to us to build our menu for those customers who might want to trade off of our great wings to other items,” Chaon says.

Beyond its menu, Native New Yorker’s price point and value have made it a popular choice among multiple customer groups. “Our value continues to be our niche, and is the one thing that has resonated well with our customers,” Chaon says. “We’ve done an excellent job being strong in four major demographics – we’re a great place for Millennials, Gen Xers, Baby Boomers and Matures.”

Staffing Strength
Employees and vendors are at the heart of all of Chaon’s ongoing initiatives for the company. Native New Yorker’s suppliers help it offer new menu items and serve safe, quality food, while its staff acts as the face of the restaurant to customers. “I think we have done a great job looking outside our industry for bench strength, and we’re very disciplined in hiring,” Chaon says.

Training programs include a 12-week manager culinary and service development course, as well as monthly and quarterly continuing education courses.

“One of our big mantras here is ‘do not walk by a coachable moment’ – if you have an opportunity to stop and coach someone, you should never give up the chance to do that,” Chaon says.