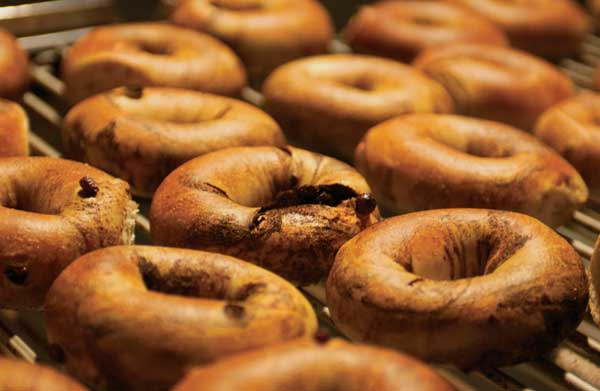 When Paul Neri started Neri Bakery in Port Chester, N.Y., in 1910, he probably did not expect the business to grow into the largest employer in town. With 311 employees on 24/7 shifts in a 240,000-square-foot facility, it is today. In the past three years, it has invested more than $5 million in improvements to its plant.

“It’s an enormous investment to stay up in this industry with the latest equipment, but if you do it, usually the payback is pretty good,” Vice President of Operations C. Domenick Cicatelli declares. “Our ovens are over a million dollars each – we have five of them. Our mixers are over a half-million dollars each – we have six of them. We reinvest millions of dollars a year into the latest technology in this business, from our 100-foot tunnel ovens to the latest in process cooling for the product and packaging.” Products are automatically stacked and packaged. “Nobody really touches the product anymore in this industry,” Cicatelli maintains.

“We’ve made so many upgrades this year, it’s unbelievable,” he insists. “We went to a liquid bulk yeast system – most bakeries use block yeast. We get it delivered in tankerfuls. It gets pumped in the building and gets distributed to our six 1,300-pound-capacity mixers. The yeast is universal. We’ve just put in a state-of-the-art refrigeration system that is much more environmentally friendly as far as the material used to run it, and we’re constantly upgrading in that area.”

Instead of using R-22 refrigerant, which can damage the earth’s protective ozone layer when released, the refrigeration systems used in the manufacturing process employ glycol as refrigerant. “It’s a lower-pressure system,” Cicatelli points out. “It’s friendlier to your machines because R-22 is a high-pressure system. We’ve had a lot of successes with it so far. It’s been in use just under two years now.”

By changing its lighting, the company has reduced its electrical consumption by two-thirds. “We went from 460-watt metal halide fixtures to 110-watt reflective fluorescent fixtures,” Cicatelli explains. “The fixtures are actually lined with a reflective metal to distribute the light better and at the same time use less wattage to do it.”

Other energy efficiency improvements include automatic shutoff of production machines if they run unattended for more than 10 minutes. “We’ve recaptured the spent heat of the compressors in our motor room and use that to heat loading docks in the winter,” Cicatelli points out.

Neri’s Bakery Inc. specializes in bread products such as Italian bread; specialty Kaiser rolls; and hero, party and whole wheat breads. “We’re one of the largest producers of bagels in the Northeast,” Cicatelli notes. He estimates wholesale accounts with foodservice and retail clients represent 98 percent of the company’s business. “Of our wholesale business, probably 60 percent or more winds up retail on the shelf,” Cicatelli estimates. Its retail store in Port Chester sells cakes and pastries and is manned by seven pastry chefs and cake makers.

“We still have the old traditional bread routes – about 50 of them – but we push out 25 trailers a day of Italian bread and bagels,” Cicatelli calculates. “We have our smaller routes – owner-operated distributors will deliver to pizzerias and delis. Then we’ll sell trailer loads to other companies. We also sell our Italian bread line to other companies that don’t bake Italian bread but have routes of their own that will expand their lines by buying from us.”

The company’s products are delivered throughout the United States either fresh or frozen. Fresh products are delivered mostly to the Northeast. “What we can’t reach in the fresh market, we freeze and send out that way to other large food houses and distributors and distribute it from there,” Cicatelli explains. “We have a 10-truck fleet of our own as well as trucks that come in from our customers.”

“We use just under 2 million pounds a week of flour,” Cicatelli reveals. “Some of the other bulk products we use are 12,000 gallons a week of liquid sucrose sugar and 12,000 gallons a month of soybean oil. We’re constantly conscious of our ingredients and work at our best to keep our recipes as natural as possible.”

Those ingredients are introduced into the mixer and then sent into a proof box, where a combination of steam and heat proof the bread up to size. “It’s monitored closely there by our bakers, and once it achieves the correct size, it goes into a refrigeration process – a retarder, they’re called,” Cicatelli explains. “From there, they reach an appropriate temperature and texture, and go down to the first floor of the baking area. They’re automatically picked up and placed into the oven by automatic oven loaders.”

Then each product is baked for the appropriate time. “They come out and go through one mile of cooling conveyor track – where the product is cooled to a certain temperature – and then goes into the packaging process, where machines stack and bundle and package them,” he continues. “Then the finished package is placed into a box or tray and prepared for shipment in our staging area.” The entire process from mixing to packaging takes approximately four hours.

Such highly mechanized production baking requires a substantial investment in equipment and infrastructure. A new tunnel oven cost $1.2 million and a new slurry mixer for Neri’s toaster cake operation was $70,000.

A 62,000-square-foot addition was completed in March 2010 to increase the bakery to 240,000 square feet of work space. That is quite a change from 1973, when the company bought the then-14,000-square-foot building that had served as a uniform laundry.

And Neri’s is not finished improving the facility. One of its next tasks is to replace cooling conveyors that now require oiling. “We’re going to a greaseless system with the first one on order now,” Cicatelli announces. “It makes it easier to stay in line with food safety to avoid contamination issues. We’ve upgraded all our metal detectors. Everything we bake goes through metal detection to detect foreign objects and a strict sifter process. We receive a lot of ingredients from the outside, so everything we do is screened or sifted here. Nothing is just simply introduced into the system.”

The company purchases its electricity and natural gas directly from the New York Independent System Operator and the New York Mercantile Exchange with a third-party provider. “We have significantly cut our costs in those areas by doing it this way,” he maintains. For example, when flour is at a good price, Neri’s may buy 100 truckloads of it.

Cicatelli noted that the price of flour had doubled in the past three months. Nevertheless, Neri’s had not yet raised its prices to compensate. “We do our best to hold the line as long as possible and still stay profitable,” he asserts. “Our practice has been to try  to ride the wave for a little while and see if it’s going to rebound and come back down before we jump the gun.”

Neri’s Bakery opened in 1910 on Beech Street in Port Chester in a building the same size as a modern garage. “Back then, the neighborhood people would prepare their own dough and bring it to the bakery, and the Neris would bake it for a nickel,” Cicatelli recounts. “Then they started to produce their own bread, and one thing led to the next.”

In the mid-1960s, the bakery moved from Beech Street to Wilkins Avenue, but it outgrew that location by 1973, when it moved into its present facility.

Founder Paul Neri passed the business to his son Anthony in the 1960s, who served as president until 1987, when his sons Domenick and Paul became president and CEO and vice president, respectively. Domenick’s son Anthony currently is general manager of the company and his daughter Brett is assistant to the CEO.