New Holland Brewing plans to open a new brewpub while focusing on exploring new flavors and techniques with its most popular craft beers and spirits.

So much goes into brewing the perfect craft beer. From barrel aging to trying new flavors and techniques, New Holland Brewing blends the art of being consistent to core brands and styles with being adventurous and trying new things. Thanks to its most notable barrel-aged craft beer, Dragon’s Milk, the brewing company has become a nationally recognized brand after 20 years.

“We’re very much honoring balance and are committed to expressing the simpler, subtler beauty in beer and spirits,” says Fred Bueltmann, vice president of brand and lifestyle. “We don’t sit still; we have developed new flavors and techniques along the way. Keeping both of those energies in balance is what we’re particularly proud of.” 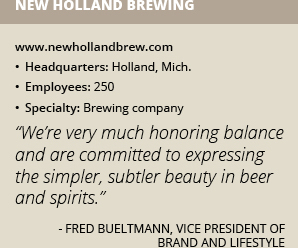 Versatile Flavors
Dragon’s Milk put New Holland Brewing on the map because it is a versatile beer. Bueltmann has found that even people who don’t think they’re typical beer drinkers find that they are converted once they try Dragon’s Milk. He says it complements savory dishes but is particularly delicious when paired with desserts thanks to its chocolate, coffee and vanilla tones.

“Dragon’s Milk is the most versatile and surprising and enlightening beer for food I’ve ever been involved with,” Bueltmann explains. “I just find that it’s really a beer that is agile and shape-shifting when it comes to pairing. It’s also a great way to invite wine drinkers that don’t believe they’re beer drinkers in. I like to ask people what they like to eat and drink. If they like coffee, red wine and chocolate, then Dragon’s Milk is going to be familiar to their palate. It has roasty tones and a tannin structure that will be pleasant and recognizable. It’s been the door to people enjoying beer.”

But New Holland Brewing doesn’t offer just craft beers; the company began distilling its own spirits in 2005. Beer barrel bourbon is the top-selling spirit. After a barrel is used twice for Dragon’s Milk, the company lets the bourbon age for 90 days inside the barrel after aging in an oak barrel for several years. “That brings a roundness and smoothness in a roasty malt that is very remarkable,” Bueltmann notes. “That was an adventurous, creative step for us. It simply started with us thinking, ‘I wonder what this would taste like.’”

Some of its other best-selling beers and spirits with the broadest reach are Mad Hatter Midwest IPA, The Poet Oatmeal Stout, Knickerbocker Gin and Zeppelin Bend Malt Whiskey. Additionally, New Holland Brewing introduced a number of new products this year, including Lost Dune, a blueberry pale ale for the summer; Blue Haven Gin, a blueberry-flavored gin; and a number of Dragon’s Milk Reserve beers, where the original recipe is modified with new ingredients such as raspberry, lemon, coffee and chocolate.

“Usually something within the lineup of beers and spirits will change every year,” Bueltmann says. “Most of the bourbon barrel-aged beers out there are limited edition or special release brands. It’s something that our team really worked on. But Dragon’s Milk is the unlimited release, available year ‘round in all the markets. It’s a special beer but available every day. That’s taken a large commitment to learn how to manage our seller and manage processing beer. It all takes a lot of technique and persistence.”

Growing Brand
New Holland Brewing’s craft beers are sold in 31 states and its spirits are found in 20, with plans to grow into more. The company also has a restaurant brewpub distillery, Pub on 8th, in Holland, Mich., with plans to open a second in Grand Rapids, Mich., called The Knickerbocker. Opening in the fall, the new 40,000-square-foot brewpub will brew and distill on site, but it will focus on a full dining experience with wood fire ovens and grills, seasonal beer gardens and mezzanine cocktail lounges and patios, while bringing in local, fresh produce and meat.

“The Knickerbocker is our most adventurous restaurant yet,” Bueltmann says. “We’re applying the lessons from Pub on 8th from the last 19 years. Overall, The Knickerbocker will be focusing on bringing beautiful food and drink to people and help people have a better connection to food and drink while they relax and stop and taste.”

Growth can be fantastic, but can also create a number of challenges. Namely, New Holland Brewing found it had some space challenges to overcome. It recently expanded its dock into a larger cooler for finished goods and doubled its barrel cellar with the growth of its product selection.

Adding spirits to the lineup has been successful for the company, but it also requires more space because these products take three years or more to age, while Dragon’s Milk takes about four months. “Understanding how to be good students of margin and keep the company healthy through growth while changing the types of products you carry is a challenge,” Bueltmann explains.

Building the team to handle this growth has been an exciting challenge for Bueltmann. “We celebrate community and creativity and we’re very team oriented in that we really want to empower people to develop and enjoy the process,” he says. “We encourage people to be perpetual students to learn and excel. Our mission is about enhancing people’s lives. We’re customer-focused and have a culture where people feel valued and excited to be part of a team, and we’re making people happy with food and drink.

“We have a lot of people that really love being part of this team,” he continues. “I’ve been able to witness a lot of people develop their own skill and it’s been special to be part of that. I’m glad we learn to take time to recognize it and foster it and share it with one another. We hear what a special place this is constantly – and that allows us to do the great things we do.”