Back to Profile Gallery > Northern Foodservices 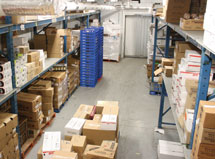 There are many food distributors serving the numerous mines and exploration camps throughout the Northwest Territories. Northern Foodservices maintains its head office and some of its operations in this remote region of Canada, which makes it capable of filling orders on a next-day basis.

“We are the largest supplier based in the Northwest Territories, and what distinguishes us here from our southern supplier competitors is the ability to have product the next day, when required, for our customers,” General Manager Roger Walker says. “That is because of our geography. The 20-hour transport trip from Edmonton to Yellowknife [Northwest Territories] does not allow enough time for southern companies to process orders for next day delivery. It’s a niche that we have and we need to continue to work that.”

Northern Foodservices was created in 1999, and began serving local restaurants with fresh produce, dairy, meat, and other food items. It soon entered the mining camp market, and with major new customers such as BHP Billiton and DeBeers, Northern Food¬services needed to expand.

The company supplied all of the food during construction of Rio Tinto’s Diavik Diamond Mine, and continue to supply it with their fresh produce, dairy products, and some dry goods.

“Our business out of our Edmonton facility is rapidly expanding,” Walker says. “We see our clients in the oil gas sector in Alberta, Saskatchewan and northern British Columbia as the next growth generator for Northern Food¬services. Although it is a very competitive market, we have the capacity, expertise, and commitment to customer service that enables us to compete with large southern distributors.”

Through its localized focus on distribution and regional warehousing, Northern Foodservices can serve clients who are accustomed to a minimum three-day lead time for their products with next-day deliveries, if required.

“Our Yellowknife facility is 1,000 road-miles north of Edmonton, so the large suppliers out of there can’t get their product here on a next-day schedule,” Walker says.

Climate Conditions
Northern Foodservices knows how to protect its items from the harsh winter elements of northern Canada.

“With normal winter wrap, your produce is still going to freeze if pallets are exposed to some of the extreme temperatures and wind chills that we experience here in the north.” Walker says.

Booming Business
Now that the worldwide economy is beginning to thaw out, mining and exploration companies are picking up operations in northern Canada once again. Walker says this means increased sales are en route for his company, which, combined with increasing sales from its southern division, has necessitated the search for a larger distribution facility in Edmonton. The company expects to have its lease finalized by the end of April 2012.

“The northern economy is not yet back to where it was before the downturn, but business is increasing,” Walker says.

“Our clients depend on us to ensure that their product is readily available, and is of top quality when they take possession of it,” he adds.