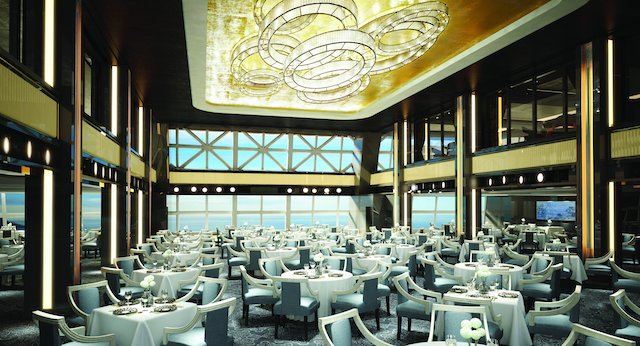 When people go on vacation, they want to take a break from everything, including schedules and rules. Norwegian Cruise Line was one of the first cruise lines to give them that freedom, Vice President of Food Beverage Operations Wes Cort says.

Twelve years ago, he explains, cruises were very structured. “You had to dine at a certain time, sit with the same people and go to a show,” he says, noting that Norwegian set itself apart with its “Freestyle” format, where passengers can do what they want, when they want.

Many companies now follow that format, which drove the 51-year-old company to set itself apart further with its food and beverage offerings. Cort, who has been with Norwegian for nine years, says that this includes catering to a more educated consumer. 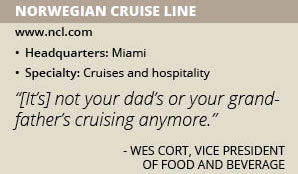 “Our concepts are very authentic,” he says, adding that Norwegian also makes sure to follow trends. “We have very contemporary food and beverage concepts with craft beers and food halls.”

Norwegian, he adds, was the first cruise line to introduce specialty restaurants to its ships. For example, its Norwegian Bliss vessel has 21 dining venues and 22 different bars and lounges, including Los Lobos, which serves authentic Mexican dishes.

The ship also has Food Republic, which serves food from all over the world, including Peru, Japan and China, and Jimmy Buffett’s Margaritaville At Sea. “That’s been really popular with guests,” Cort says. “The restaurants really appeal to everyone’s tastes.”

Norwegian’s ships, of course, also offer more than just food. Guests on Norwegian Bliss can attend performances of the Broadway hit “Jersey Boys” and race go-carts on the vessel’s track.

“The night life is full of action with casinos and bars that are indoors or out on the deck,” Cort says. “[It’s] not your dad’s or your grandfather’s cruising anymore.”

A Dynamic Industry
Norwegian’s offerings attract a wide range of customers, including families. But the company is now seeing a rise in millennial guests, Cort says.

“They love the diversity of the cuisine and the entertainment,” he says, adding that Norwegian’s research shows that this rising number will give its business a boost. “The cruise industry is going to be dynamic for years to come.”

Norwegian’s customers also are looking for simpler design spaces. “Typically, cruise ships in the past have these gorgeous design rooms that are just prolific,” Cort says.

“We’re looking at making those much more casual,” he continues, adding that guests are much more comfortable dining in their casual clothes. But that does not mean Norwegian will cut corners when building these spaces.

“That casual environment needs quality materials, quality finishes, and quality food and beverages,” Cort says. “On the design side, those will be a challenge.”

Staying on the cutting edge of food trends can be challenging for Norwegian, too. “The industry evolves so quickly at a time, you feel like you’re playing a catch-up game,” he says.

Exciting Times
Norwegian’s ships maintain a familial environment, Cort says. Each vessel features an international crew that works “very hard and very diligently, anywhere from four to nine months,” he says, noting that employees are on the job every day.

But the environment brings them closer together. “It’s something our crew members come back to,” he says. “It offers them the opportunity to make good money and they get along really well.”

Cort predicts an exciting future for Norwegian. Not only does the company plan to add a new ship very soon, it has the plan to launch the Leonardo series of ships, which will arrive in 2022. “That’ll be a different class of ships with a different design,” he explains.

The company also will create new food and beverage concepts for the ships. “It’ll really move closer to catering to younger demographics,” he predicts. “The millennials will be almost mainstream by then. We’ve got a lot of fun things to develop.”