Back to Profile Gallery > Nuovo Pasta 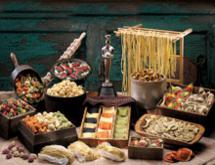 The economy has created a number of aspiring gourmet chefs throughout the United States as consumers recreate meals at home instead of splurging at restaurants. Nuovo Pasta produces a selection of premium pasta and sauces in a variety of flavors, colors and shapes to help bring out the inner Food Network celebrity chef in all of us – at a reasonable price.

“Initially, when the economy first hit a downturn, the knee-jerk reaction in the marketplace was that everything had to be inexpensive,” says Tom Quinn, vice president of operations. “But value is not a money thing. It’s about getting a product worth what you pay for it. That’s what we strive for – we work very hard to provide a good value.”

Carl Zuanelli founded Nuovo Pasta in 1989 in his own kitchen with an imported tabletop pasta machine, which he used to supply authentic pasta products to fine dining establishments and catering companies in the Northeast. Today, the company has grown into a staff of culinary-trained associates producing pasta and sauces in a state-of-the-art facility in Stratford, Conn.

Nuovo Pasta produces all fillings by hand using traditional methods that have earned the company national awards in culinary competitions, including numerous International Fancy Food awards over the past 11 years. The product offerings reach customers throughout the United States and internationally, with chefs, restaurateurs, caterers and retail consumers as end-users.

Throughout its history, Nuovo Pasta has strived to remain on the cutting edge in the latest flavor profiles and consumer trends. With the Italian word for “new” right in its brand name, Nuovo Pasta is continuously on a worldwide search for the next big hit in gourmet food.

“Our products offer interesting hybrids,” Quinn says. “They’ve all been developed as proprietary products, but the flavor profiles have come from food trends all over the world.”

While these lines have been developed for the foodservice industry, Quinn says Nuovo Pasta is pouring resources into its consumer products, as well. As the economy has worsened, consumers have avoided restaurants and elected to cook for themselves. However, that doesn’t mean they are willing to shortchange quality. “People still maintain that high benchmark for good food,” Quinn says. “They’re not staying in and making PBJ sandwiches at home. They still want good food, but people want to pick up this good food and bring it home.”

With that mindset firmly in place, consumers have responded to Nuovo Pasta’s product line more in the last two years than ever before, according to Quinn. This is especially true as of late, now that consumers have learned to live in this new economic reality.

Quinn says this often means an $8 box of pasta is a good deal when compared to meals that are $15 per plate at a restaurant. Nuovo Pasta has taken those needs to heart by reevaluating the formulas for its retail products to ensure they meet the highest quality standards possible for the price.

“People want to know they did right by their money because people are counting their pennies, but they’re not putting it in their mattresses,” he says. “People are starting to treat themselves a little bit. The fear of job loss has lessened to a degree. It’s a slow climb, but they’re telling themselves, ‘Let’s go get something for dinner tonight, and let’s do something nice.’”

No matter what the economic climate, Nuovo Pasta continues to search for the flavor profile that will be the next big trend.

“We’re already looking toward the next 20 years and looking at different product advantages,” Quinn says. “As trends continue to evolve, it gives us a brand new canvas to paint on every time. There’s only a number of ways to make vanilla ice cream, but we can come up with a different flavor every six months.”