Back to Profile Gallery > Nutriom LLC 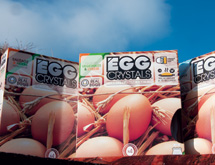 Dehydrated eggs are typically not an item found in most people’s kitchens for a simple reason – they tend not to taste very good. Nutriom LLC is changing this.

“The traditional method of dehydrating eggs involves using a spray dryer at very high temperatures, which damages the flavor of the egg and denatures its protein,” says Rodrigo Etcheto, director of marketing for the Lacey, Wash.-based company. “Typical dehydrated eggs don’t work very well for making scrambled eggs, but do work for industrial uses such as making pasta. We wanted to come up with a dehydrated product that, when reconstituted, cooks and tastes just like a fresh egg.”

The company, founded by Etcheto’s family in 2001, developed a proprietary drying technology that instead uses low temperatures to dehydrate eggs. Nutriom’s Ova Easy brand of dehydrated egg crystals also offers a longer shelf life of up to seven years unrefrigerated, as opposed to a typical one-year shelf life.

Nutriom distributes dehydrated eggs throughout the United States. Plans are underway to expand into markets in Asia and Latin America, where there’s a high demand for egg products, as the majority of egg production is based in the United States, Etcheto says.

A New Concept
After more than seven years of selling Ova Easy dehydrated egg crystals to the foodservice, camping and military markets, Nutriom now takes its business to a different audience – the general consumer. In January 2013, the company introduced Egg Crystals, a product aimed at people who enjoy scrambled eggs but may not have the time to make them, particularly during the work week.

“We’ve seen a lot of research that indicates that the reason consumers don’t eat more eggs is because of the convenience factor,” Etcheto says. “People don’t want to pull out the pan, cook the eggs and then clean and put the pan away most days, so scrambled eggs is something people tend to eat on weekends.”

Egg Crystals features dehydrated eggs and water in separate compartments in a plastic pouch. When the pouch is squeezed, a seal between the water and eggs is broken, combining the two together. The entire pouch is then microwaved and ready to eat in 75 seconds. The product, which is now available online and in retail stores in the company’s home state of Washington, is available in three flavors – sea salt and pepper, sausage and herb, and vegetable and cheese. A low-fat version is expected later in 2013.

The Egg Crystals concept is already finding favor in test marketing, Etcheto notes. “We’re having success with parents and kids – kids like the packaging, and it’s easy to make, so they can put it in the microwave themselves or have their parents do it,” he adds. “Parents like it because it gives them a good meal option in the morning that’s quick and easy.”

The company is slowly rolling out Egg Crystals using an alternative marketing strategy focused on live demonstrations and sampling. “We’re finding that people like the product and are attracted to the packaging, but don’t necessarily know what it is or that it’s a pure egg product,” Etcheto says. “We’re doing a lot of different promotional activities based on getting our product into people’s hands and having them actually hold a pouch and use it.”

Nutriom hopes Egg Crystals will eventually grow to be a household name. “We think this has potential to become a big consumer brand and something that’s used daily. It’s just so easy to use, and people all over the world like eating eggs, so the fact that we can distribute this so easily and it doesn’t need to be refrigerated gives us an advantage.”