Back to Profile Gallery > NYCWFF 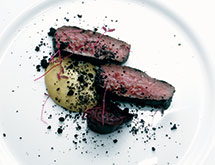 The crisp air has blown in and the smell of pumpkin is everywhere – from your morning latte to the incense in the office – and that can only mean fall has arrived. The new season begins, bringing with it the highly anticipated annual New York City Wine & Food Festival, one of the largest wine and food festivals in the United States.

“We are excited to unveil our 2015 event lineup, which includes the return of festival fan favorite events and a variety of new experiences for our passionate attendees,” says Lee Brian Schrager, festival founder and vice president of corporate communications and national events for Southern Wine & Spirits of America Inc. “Festivalgoers will have the opportunity to see their favorite chefs and culinary personalities, including both veteran and new faces from the Food Network & Cooking Channel, plus interact with leading winemakers and spirits producers from the Southern Wine & Spirits of New York portfolio.”

There are also plenty of new fêtes to keep everyone’s taste buds tantalized at the 2015 festival, including brunches hosted by Bobby Flay, Martha Stewart and Geoffrey Zakarian, a Harlem-inspired midnight Jazz breakfast and a celebration of ramen with Chrissy Teigen and Serious Eats’ J. Kenji López-Alt. A new signature Art of Tiki: Cocktail Showdown, intimate dinners and seminars with celebrated chefs and beverage personalities will also tempt attendees.

A Worthy Cause
The 2014 New York Wine & Food Festival drew a crowd of about 55,000 and raised $1 million for the nation’s leading hunger-relief organizations. “Eradicating hunger, both here in New York and across the country, is something we know we can always count on our talent and fans to support,” President of the Food Network & Cooking Channel Brooke Johnson said last year.

The festival has raised $8.5 million for the Food Bank for New York City and the Share Our Strength’s No Kid Hungry campaign. Chef Alex Guarnaschelli attends both the New York and South Beach Wine & Food festivals regularly and says she teamed up with the No Kid Hungry campaign because she is a chef and a mother raising a child in America.