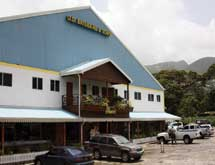 Situated on the lush, picturesque island of Dominica is a supermarket, playground, ice cream parlor and wholesale distribution center well known and favored by locals of all ages called O.D. Brisbane & Sons (Dominica) Ltd. Brizee’s Mart – the retail component of the company – is located in Canefield, Dominica. It was built in 1994 by Jerry Brisbane, who named the supermarket after his father, Ivan Brisbane, a businessman known around the island as “Brizee.”

Ivan “Brizee” Brisbane established O.D. Brisbane & Sons in 1951. It started as a small, one-man operation with Brisbane going out into the market to sell fabrics, zippers, buttons and other trinkets.

After many successful years, O.D. Brisbane & Sons encountered financial problems. When Brisbane passed away in 1983, the company chose to consolidate its interests and closed down most of its branches, including its hardware, lumber and cement operations leaving only the food portion.

Jerry Brisbane took over the family business on behalf of his father in 1985. He created a strategic focus to develop the food business, expand the company’s distribution capabilities and someday venture into retail.

“When I took over, we did not own our facilities; they were rented,” Brisbane recalls. “And the business was spread out in different areas in the capital, Roseau. In 1994, we decided to move and set up a central location on two-and-a-half acres of land about one mile outside of the city, which we owned. Within this central location, we set up a retail store/supermarket now known as Brizee’s Mart.”

Brizee’s Market occupies about 12,000 square feet of the company’s main 25,000-square-foot distribution operation. It includes a playground facility – the only one on the island, Brisbane says – and an ice cream parlor.

“The concept is a family outing where the kids can come play on the playground and have ice cream while the parents shop,” he says. “We have convenient parking and good security.“These are the kinds of things that set us apart,” Brisbane continues. “With this new model we’re going to put in place, it’ s going to take us up another notch and set us farther apart from our competitors.”

Brisbane intends to transition the company into a “one-stop buying club,” similar to Costco or Sam’s Club, he says. With more than 9,000 SKUs of U.S., European, Central American and Caribbean products, O.D. Brisbane & Sons is well on its way to achieving this goal. Brisbane says the company has plans to increase its SKUs with goods and services that will allow the company to better serve Dominica.

“We are one operation trying to expand, improve and perfect to better serve our clients,” he states. “We are in the process of formulating and finalizing our layout, which will consolidate the wholesale/retail shopping experience rather than having them separated.

“We also will be expanding into the pharmaceutical area, the home and garden area, small appliances and electronics, and other complementary services,” Brisbane adds.

“The goal is to be ready by peak season, which starts in October of next year,” he notes. “We anticipate this will be a significant investment that will lead to significant growth.”

Restructuring the company’s business model will put O.D. Brisbane & Sons in an even stronger position when economic conditions improve.

Right now, the market is Dominica is very tough, Brisbane says. “It’s the toughest I’ve seen since I’ve been here,” he notes. “The market is shrinking with new entrants coming in, which could be a formula for disaster. It comes down to survival of the fittest and trying to get a bigger piece of a smaller pie.

“However, in our company, we anticipated this a long time ago,” Brisbane continues. “We have been continuously and consistently taking steps to cut costs and become more efficient, which has put us in a good position.

“We believe it’s an opportune time to expand in this type of economy because you can build at a reduced cost and thereby get this type of work done more economically than when the economy is booming and the builders and suppliers are able to get higher prices for their services.”

That seems to be the case universally, but companies in Dominica have distinct economic disadvantages that aren’t as evident in other countries, Brisbane points out. “The productive sector is not performing, and it seems to be getting worse,” he says.

“Our manufacturing sector is struggling, and tourism has not been growing in the main income sector of stay-over visitors. Remittances from families abroad have dropped by 51 percent, and people are losing their jobs, their homes and whatever else. So, the overall effect is a barrage of negative factors impacting the country’s economy all at once.”

In many ways, the success of a company – especially in the food distribution and retail industry – depends on the economic strength of the overall community, Brisbane says, which is why O.D. Brisbane & Sons understands the importance of giving back to the community through philanthropic contributions.

Each year for the past eight years, the company donates computers and printers to local schools. “We intend to keep doing that for as long as we can afford it,” Brisbane maintains. The company also donates equipment to local hospitals and healthcare facilities. “Our passion is geared toward children and the elderly because these are the two segments that need the most help. The people in between are stronger and healthier, so they can take care of themselves.”

‘Year of the Family’

The accumulated earnings reached more than $17,000, and the company added funds to bring the amount to $30,000. O.D. Brisbane & Sons is working with the Child Fund organization to ensure these funds are put to good use, it says. In 2007 and 2008, the same concept was applied to raise funds for deserving causes.