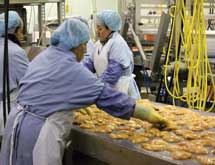 Throughout the past 70 years, O.K. Foods has remained a family owned operation that is heavily involved in its Arkansas and Oklahoma communities. But in that time, the company has evolved from a livestock and poultry feed producer into one of the world’s largest fully integrated poultry producers. Today, the company employs a staff of roughly 4,000.

In addition to its Fort Smith, Ark., headquarters, O.K. Foods operates other facilities in the state and in Oklahoma. Its facilities include feed mills, hatcheries, debone plants, processing plants and frozen food plants.

O.K. Foods serves customers from five sectors: quick-service restaurants, traditional foodservice such as hotels, retail, commodity sales and industrial sales. The company works with 400-plus contract growers to keep up with customer demand for its products.

“We’re in the top 10 producers serving customers throughout the United States and overseas,” says Trent Goins, senior vice president of sales and marketing. “We’re a vertically integrated poultry processor, from feed production, hatcheries and farms to the finished, packaged product.”

For its entire existence, O.K. Foods has had a focus on the family, and it maintains that today. Goins’ father, Randy, is O.K. Foods’ CEO. Collier Wenderoth Jr. is the owner of the company and the chairman of the board, and his great-grandfather Collier Wenderoth Sr. started the company, which makes Trent Goins the fourth generation. “Many family businesses don’t make it past the third generation, so every day I wake up and am very grateful for the opportunities to continue to build on the success of my predecessors,” he says.

Although family owned companies or those with longevity can have a tendency to follow status quo, O.K. Foods goes against the grain. The company emphasizes using the latest technology – which it often has a hand in developing – to improve its processes.

“O.K. Foods has always been open to new ideas and new technology, and we’ve been on the forefront of integrating our facilities with the latest technologies,” Goins says.

A prime example of its innovation is that O.K. Foods was one of the first in the poultry industry to go full scale with an automated deboning machine. “We’ve been running the system for close to three years,” Goins says. “It was at the time – and still is – a revolutionary, state-of-the-art system to put in a processing facility for the poultry industry.”

O.K. Foods’ deboning facility has four Meyn lines to process poultry and a fifth dedicated to R&D. That fifth line is advantageous, Goins says, because if something needs to be adjusted on one of the other four, they can use the fifth line without interrupting the process.

The recent addition of a CFS Cookstar to O.K. Foods’ fully cooked capabilities greatly increased the amount of chicken it can cook per hour – from roughly 3,000 pounds an hour up to 7,500 to 10,000, depending on the product.

A major recent innovation at O.K. Foods is the low-atmospheric pressure system (LAPS), which was developed through a collaboration between O.K. Foods’ Director of Technical Services Karen Christensen, Techno-Catch and Mississippi State University. O.K. Foods President Ken Primm says the system is a revolutionary method of stunning and killing poultry at slaughter.

“LAPS is no doubt a potential game-changer for the entire poultry industry,” he states. “By introducing poultry into an chamber as they are removed from trucks while still in tact in transportation containers, the birds are subjected to a slow reduction in atmospheric pressure that creates a euphoric environment as the birds are rendered lifeless.”

After exiting the chamber, the birds are moved into O.K. Foods’ facilities and processed through the system as normal. The major difference is that the birds are easier to handle, which minimizes the potential for mishandling a live animal.

“With this system, we are able to completely reconstruct the back dock of our slaughter facilities,” Primm says. “This allows for not just an improvement in animal welfare but also worker welfare.”

O.K. Foods recently removed its test chambers to make way for the installation of the LAPS system, which is set to go online in fall. “In all my 30 years in this industry, for multiple reasons, this is the most exciting project I have been associated with,” Primm remarks. “This will essentially nullify animal welfare concerns at the plant location.”

With growing concerns of the welfare and slaughter of animals, O.K. Foods made a commitment to improve its processes and became a leader in animal welfare. To ensure its processes meet National Chicken Council guidelines, the company performs routine internal audits, as well as “surprise” audits by a third party.

“From automating our hatcheries to eliminate human handling to certifying our contract farms as welfare-guarded to automating the harvesting and loading process to remove human handling at that point, our company keeps backing up our commitment with action,” Primm says.

In the past 18 to 24 months, Goins says O.K. Foods has seen its business for quick-service restaurants decline 15 to 20 percent. Alternatively, the company’s retail business has grown. He estimates that 10 years ago, 40 percent of O.K. Foods’ business was in quick service, 30 percent was in foodservice, 20 percent was retail and 10 percent in commodities.

“The dynamics of our business have changed over the last couple of years with retail becoming a larger part of our portfolio,” Goins says. “With quick-service restaurant and national account business down, people are heading to the grocery store and going home and cooking meals for their family rather than going out to eat.”

Although O.K. Foods is a big name in the industry, it’s still focused on making sure its employees and communities are happy. The company donates to several charities, including giving to United Way for more than 40 years. It also sponsors 4-H activities and Future Farmers of America.

“From day one, we have always been involved in the local communities of our operations,” Goins says.

O.K. Foods is very active in First Tee, which “provides young people of all backgrounds an opportunity to develop life-enhancing values such as confidence, perseverance and judgment through golf and character education,” the organization says. In fact, it is so active with First Tee that the children of the company’s employees can participate at no cost.