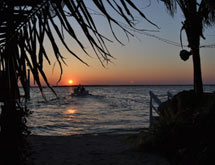 Sometimes big ideas have modest beginnings, and the Seacrets entertainment complex of five summertime dining areas, 19 bars, six entertainment stages, a hotel and a radio station literally grew out of the home of founder Leighton Moore. That home is still in the complex of buildings that make up Seacrets on the bayfront, which brings a lot of Jamaica to Ocean City, Md., year-round, but especially in the summertime.

Moore apparently follows the belief that if the residents of Ocean City, Md., can’t get to Jamaica all the time, he will bring Jamaica to Ocean City. Each year, Seacrets plants between 400 and 500 30-foot-tall palm trees and 4,500 plants at the complex to give it that island feel at a cost of approximately $400,000.

“I have the only jungle,” Moore maintains. “Anytime you have the only anything – unless it’s a bad thing – it’s a good thing.” Seacrets employs a 150-ton crane to plant the trees in early to mid-May. The palms are transported from Homestead, Fla., on 17 to 20 tractor trailers. Those are a lot of trees, but then the 5-acre Seacrets complex can handle nearly 5,000 customers in the summer and approximately 1,500 to 1,600 in the winter, Moore maintains.

During the summer, customers can sit at tables in the shallow water off the beach and be served drinks. DJs play reggae and other types of music to set a relaxed mood. The complex’s largest dining area is outdoors under the palm trees on the beach and holds several hundred people. Fans and misters are used to keep the customers cool when the weather necessitates it. Three year-round dining areas are indoors, and each holds approximately 50 diners.

“The summer menu is a little faster, lighter, a little more casual, steal-me food, where somebody gets one item, and then it’s conducive to share the pizzas, the jerk chicken or the french fries,” Moore says. “In the winter, we go more with steaks, seafood, platters and dinners, as well as very nice lunches.”

The winter menu usually is introduced in October. “Some of the areas we use as general public and party and bar areas right on the water turn into dining areas during the wintertime,” Moore says. “We have less people, and they’re coming more for dining than the entertainment. During the summer, maybe 500 people are eating and sitting down at tables. During the wintertime, it might be 150 all inside. It’s a little bit too chilly during the winter around here to be outside.”

During transitional weather in the spring and fall, lunch sometimes is served outside but dinner inside when the temperature drops in the evening. Temperatures in Ocean City vary from being in the 90s F in the summer down to the teens during the average winter, Moore estimates.

In winter, the majority of the Seacrets complex is shut down and the parts that are being used are heated. One summer dining area is used as a nightclub in the winter. But hanging plants maintain the island theme, along with the music, sand around the tiki bar and a lot of ambient light. “We do the best we can in a very cold atmosphere to give it a warm feeling,” Moore says.

Working on Franchising
The Seacrets complex is home to a 50-unit hotel with kitchenettes. “It costs so much money to build a hotel in a very seasonal location,” Moore points out. “During the wintertime, my bread and butter is the local people. I can make do with that, but they are not going to stay in my hotel. We have a lot of empty days during the winter.”

Moore has been working on franchising his concept for Seacrets. “It’s hard to find somebody I think will run it as well as we can run it,” Moore declares. “When you franchise it, you give away some of that control.”

Foreign Help
Because of the number of seasonal employees Seacrets hires, employment there is ideal for students visiting from foreign countries. The head of Seacrets’ waitstaff travels overseas every year in the winter to attend job fairs and choose employees mainly from Europe. Moore estimates approximately one-fourth of Seacrets employees work there year-round and half are returning seasonal employees, so the company only has to hire one-fourth of its staff annually.

Moore says his dream would be to open a Seacrets in a real island location where the tourist season would coincide with winter in Maryland. The summer would be the slow season on the island because of its tropical heat, and his year-round employees could return to Maryland for the warm months.

Moore founded Seacrets on land his family owned that had his house on it and a small three-hole chip-and-putt golf course. “I cannot stand doing nothing, so every year, I would add a bar,” Moore recalls. “I quit at 20 bars. It was the perfect number of bars for the property and for the crowds that we had during the summer. We can’t build to the biggest day – we have to build to a good average day, because otherwise you’re going to have wasted space.”

As Seacrets grew, Moore eventually moved offsite. His former home was stripped down and is still being used as a dining room in the winter. “So we saved it and made the highest and best use of it,” Moore says.

Seacrets sells its own branded food and beverage products, as well. Seacrets Honey Mustard is available in Giant grocery stores in the Mid-Atlantic area as well as on line at www.seacretshoneymustard.com.

The next products to be launched are Seacrets Jerk Marinade and Seacrets very own craft beer called Tropic Ale. Both are available for sale on the Seacrets property now but soon will launch in grocery and package goods stores in the near future.

Seacrets has several competitors on the water. “More operators bring more people,” Moore declares. “I love competition. The more people that come, the more we have the possibility of sharing the people who come. People don’t want to go to the same place every night. You all need to work together and to everybody’s ability, so people come in bigger numbers to have more fun.”