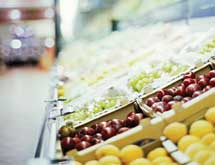 Brent Eastman and his brother Kevin were born into the grocery business. Their father, Robert “Bob” Eastman, rose through the ranks of the Kroger supermarket chain to district manager before he decided in 1980 to go into business for himself and open a Foodland franchise location in Gallipolis, Ohio. Bob Eastman got his wife, Sheila, and sons involved in the business right away.

“We’ve had our hands in just about every corner of the store,” says Brent Eastman, who started working in his father’s first store while still a high school student. More Foodland stores followed, with two additional locations opening in 1983. “Every year or so during the 1980s we were doing some kind of project or upgrade; we had pretty steady growth adding stores.”

More recently, the family expanded its flagship Foodland store in 2007, expanding the formerly 16,000-square-foot location to 22,000 square feet and revamping its interior.

This year, the Eastman family’s company – now known as Ohio Valley Supermarkets – marks its 30th anniversary. In addition to six Foodland locations, the family also owns and operates five Save-A-Lot stores. Brent and Kevin Eastman co-own the company. Foodland and Save-A-Lot are supplied by and operated under an agreement from national grocer Supervalu.

Ohio Valley Supermarkets owns two stores in West Virginia; the rest of its holdings are in Ohio.

While the Foodland stores are conventional-style supermarkets, Save-A-Lot – one of the country’s fastest growing franchises – offers a more limited selection of items at everyday low prices. The franchise offered the Eastmans an opportunity to expand their stores’ customer base, Eastman says.

“Black Angus Beef has become a real draw and a destination-type item for us,” Eastman says. “It’s definitely what sets us apart from the competition.” All meat products are cut fresh in Ohio Valley’s stores as opposed to coming prepackaged. “We feel our meat has a better appeal and a better quality.”

The Foodland and Save-A-Lot stores also offer a number of private label products that have seen success with many consumers. Foodland offers Flavorite and Shoppers Valu labels; successful labels in the Save-A-Lot stores include the Wylwood vegetable label.

Eastman says Ohio Valley Supermarkets’ local economy hasn’t seen major changes amid the national recession, but he has noticed some buying habits change in the last few years. “I’ve noticed a trend of customers being more thrifty in what they’re buying; many have traded down in some of the things they’re buying,” he adds. “Instead of buying expensive steaks, they may buy ground chuck now instead.”

Ohio Valley strives to balance the expectations of being a major grocery chain franchisee with a personal touch that comes from being family owned, Eastman says. Both Eastman brothers are involved in the company’s day-to-day operations, with Brent Eastman handling advertising and promotions and Kevin Eastman handling pricing. The brothers are familiar with all ends of their stores’ operations, as they’ve worn many hats during their 30 years in the business.

“It’s important to be a part of the store and know what it’s like to be the person bagging the groceries or ordering the meat in the back room,” Brent Eastman adds.

Several employees have been with the company for most of its history, including Controller and Office Manager Cookie Krautter and longtime General Manager Larry Howard.

The company supports community organizations such as high school sporting teams and the 4-H Club, and maintains a presence at community events including county fairs. Eastman views the company’s community involvement as a way of acknowledging and thanking its customers. “Without our customers and the support of the communities we operate in, we wouldn’t be there, so a customer focus and serving the customers’ needs is No. 1 in our priorities,” he says.