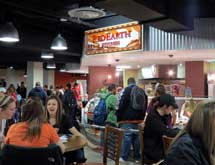 For college students – most likely away from home for an extended period for the first time – their university’s dining service becomes the substitute for a home-cooked meal. This makes the university’s dining program more or less a substitute for the attention and care they receive from their parents. At Oklahoma State University, the dining services department takes that responsibility seriously, and works to demonstrate how much it cares about its students.

Director Terry Baker says the university is staying ahead of the latest trends in student dining programs, and the most obvious demonstration of this is the university’s new student union building.

A 25-year veteran of the college foodservice industry, Baker has served as director at Oklahoma State for four-and-a-half years. In that time, she says she has spearheaded efforts to embrace new trends and enhance the dining services program in a way that’s relevant and attractive for its students.

“The most important aspect is listening to what the students want and getting to know them and what the new trends are,” she says.

The university operates 30 dining concepts on its campus in Stillwater, Okla., and Baker says they run the gamut from grab-and-go convenience stores to coffee shops to franchise restaurants to fine dining. The focus, she says, is on providing students with the power to make their own choices.

“Possibly anything you can imagine, you will find here at Oklahoma State University,” Baker says.

State of the Union
Baker says the university’s commitment to listening to what its students want is exemplified in its most recent dining services project. “One of the key things we’ve been doing this year is work with the university to provide new and innovation dining options in the newly renovated student union,” she says.

The student union was closed for nearly a year-and-a-half while renovations were being performed on the building, and the reinvigorated facility now sports a number of concepts ranging from familiar franchises to self-branded stations. Above all, the new student union brings a sense of diversity and provides students with greater choices than ever.

For example, the new student union includes the first-ever Johnny Rocket’s hamburger franchise on a university campus, along with Caribou Coffee, Baja Fresh, Chick-fil-A and Jamba Juice. In terms of original concepts, Baker says the student union dining features Passport, focusing on international cuisine prepared in front of students as well as rotating cuisines from different nationalities. Baker says the university has an international student population and campus community that likes international foods.

Another significant trend the university is paying close attention to is sustainability, and the student union’s Red Earth Kitchen concept caters to the growing awareness of sustainability in foodservice.

Baker says Red Earth Kitchen features products made in Oklahoma while concentrating on homemade soups, salads and sandwiches. The university has joined with local farms to provide cage-free eggs and other sustainable and organic products for the concept.

The student union’s dining floor plan encourages students to gather together to enjoy their meals, but also provides each concept with its own space featuring concept-specific branding that gives each area its own specific feel.

“Each restaurant has its own themed concept,” Baker says.

Broadening the Goals
Outside of the student union itself, Oklahoma State University’s dining services program seeks to do right by its students by promoting good habits. Baker says the university recently received a grant for a nutritional awareness program that will promote healthy eating on campus. Part of this program will involve labeling on grab-and-go foods detailing nutritional information, as well as demonstrations to teach students how to cook healthier in their dorms.

Other recent programs focus on promoting sustainability on campus. Baker says that this year, the dining services department set a goal to become eco-friendly with all of the products used in the student union.

She adds that the university wants to expand this initiative throughout the entire campus soon. Also, the department has teamed with student government to donate leftover food from dining services to area charities and service groups.

‘Redefining Dining’
Although Baker says the department is “redefining dining on campus” with the new student union, Oklahoma State isn’t done yet. She says the dining services department’s goal is to continue to increase the options available to students on campus, and she knows the department’s staff is committed to make it happen.

“Our immediate goal in the next year is to incorporate more healthy dining,” Baker says.