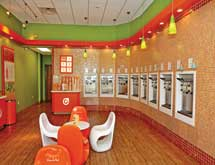 In the spring of 2011, Food and Drink (FAD) magazine featured Orange Leaf Frozen Yogurt and its vision for the year. Part-owner and CEO Reese Travis bought the brand with a group of private investors in 2009. At the time, the brand had only 15 stores; by the end of 2010, there were 50. When the magazine last spoke to Travis, Orange Leaf was intent on signing 100 new stores by the end of 2011.

During this same year, the nation – and the world, for that matter – was still trying to balance a teetering economy. Stress about jobs and financial uncertainty spawned the Occupy Wall Street protests. Arguments over government spending delayed decisions on the American Jobs Act, the debt ceiling and the deficit reduction. And just when the country thought the collapse of big-name companies had come to an end, Borders filed for bankruptcy. The uncertainty left many businesses frozen, but not Orange Leaf.

Late in 2011, FAD checked in with Travis to see if the vision and the reality have aligned. “We have 125 stores open and we have 45 under construction,” Travis reports. “So there are currently 125 stores selling yogurt as we speak and another 45 that have signed with Orange Leaf, signed a lease and will open over the next three months or so.” This means compared to 2010, Orange Leaf had an additional 75 stores open and serving customers in 2011.

Add to that the 45 under construction, and the brand is well on its way to opening an additional 120 stores by early 2012 compared to 2010. Combine that total with the 50 stores opened in 2010 and Orange Leaf will soon clock in at 170 locations. The company has doubled its locations in less than one year, and by the end of first quarter 2012, it will have tripled its store growth from 2010.

In 2012, Orange Leaf aims to open another 100 stores and by the first quarter of 2013, it hopes to have 300 stores in operation. In this economy, big growth typically means big changes. However, Orange Leaf has been able to meet all of its goals using the same concept and the same business model that Travis and others implemented when they acquired the brand.

One part of their growth strategy was to build up its already robust Midwest market. Orange Leaf’s strongest markets are in Kansas, Texas, Missouri and Oklahoma – where the company is headquartered. Now it can add Ohio to the list. Orange Leaf was approached by a person interested in becoming a master franchisee in the Columbus, Ohio, market. The company saw the potential to grow the brand and opened two corporate stores in Cincinnati and signed a territorial agreement with their master franchisee to cover the Columbus market.

“It caused an Orange Leaf boom in the state of Ohio,” Travis explains. “It’s one of our No. 1 markets and all it took was someone walking into one of our stores and seeing the store, calling the corporate office and wanting to do one of their own. Getting the momentum from our Columbus franchisee and the two corporate affiliate stores in Cincinnati helped springboard growth in other markets there.

“We are continuing to grow there,” Travis continues. “We have 10 locations in Ohio, two under construction, and we have several more on the pipeline with some franchisees who will come back to do additional stores.”

It also set a goal to open its first international stores, and was able to celebrate reaching that goal with its first Mel¬bourne, Australia, location, owned by partners Joe Rossi and Phil Lancaster.

“Orange Leaf has been eager to bring our offering to the international market for some time, and Australia is proving to be a great first step,” Travis stated.

“While this may be the first franchising experience for Rossi and Lancaster, we’ve worked together in the past on a few other projects so I have extremely high expectations for this relationship and for growth throughout Australia.”

If You Build It . . .
Orange Leaf’s franchise-friendly model is what has maintained the yogurt brand’s momentum. Low fees coupled with a high-level of support and a quality product brings in a steady list of inquirers. Travis himself was an Orange Leaf franchiser who saw the potential of what the brand could be – a potential that it is well on its way to reaching. He approached the San Fran¬cisco owners about buying Orange Leaf, and that is largely the way the company continues to grow today. Instead of building an international team who market to potential franchisees, the franchisees come to Orange Leaf.

And when they do get to Orange Leaf, what franchisees find is an inclusive organization that knows that the best way to grow is through stores making steady revenue, not through excessive fees. Many companies assess a fee just to submit an application, with no guarantee of approval. Orange Leaf, however, invites all applications sans fees. On average, the initial investment is $15,000. Orange Leaf charges comparatively low franchising fees, such as a royalty fee of 4 percent and a marketing fee of 1 percent.

“We have low franchising fees because we know that getting stores open and generating revenue is what makes us profitable,” Travis explains. “So not having unnecessary barriers to entry for potential franchisees helps us to develop our programming and build a corporate team to support our franchisees.” Travis explains the economy in itself is a natural barrier to entry. Because creditors are tight-fisted with lending, only well-capitalized and experienced businessmen and -women are able to put together a team and the funds to invest during this downturn.

Orange Leaf franchisees are assisted with site selection, construction and design, product supplies, training and marketing from opening day through daily operation. Its franchise-friendly model has made Orange Leaf a quick success, but Travis explains that the goal is to build a lasting brand, not just capitalize on a trend. One way Orange Leaf accomplishes that is to integrate each store with its locale.

Customized Quality
Orange Leaf maintains brand identity from coast to coast with slight variations to mesh with each community. For instance, while each store’s interior is a crisp white with orange accents, Travis encourages store owners to incorporate murals of community landmarks or local high school mascots and to source ingredients that appeal to the locals’ unique tastes.

For instance, in Melbourne, owners Rossi and Lancaster incorporated authentic Australian toppings such as Tim Tam Biscuits and Cherry Ripe Chocolate Bars. “Orange Leaf is doing the frozen yogurt concept bigger and better than any of its competitors, yet the brand still keeps a local community connection,” Rossi stated.

“This connection is what we feel Australians will embrace, not to mention the quality product and unique customer experience,” he added.

Those last two comments, “quality product” and “unique customer experience,” are the exact reasons why Travis believed in this brand enough to buy it. Each Orange Leaf store carries 16 yogurt flavors locals will enjoy, handpicked from 63 choices. Flavors range from classic tart, vanilla and chocolate to holiday flavors like pumpkin spice and eggnog or fruity flavors such as watermelon, orange and mango. Each selection can be loaded with an array of toppings such as candy, nuts, cookies, fruit, cereal or syrups. Orange Leaf privately manufactures its yogurt and employs product inspection for all its toppings. This effort to ensure quality applies to all of its vendors, suppliers and partners.

“We are proud of our rapid growth in the marketplace,” Travis says. “But [we] recognize it would not be possible without the partnerships we have in each of our vendors.” It also wouldn’t be possible without its strong consumer base, which is aided by the “unique customer experience” Rossi speaks of. Orange Leaf operates by a self-serve model. Customers choose between a 16- or 24-ounce cup and fill it with as much yogurt of as many types as they please – that goes for the toppings, as well. They place their selection on a scale and pay by the ounce.

“The customer is always happy if they make their desserts exactly the way they want it,” Travis says. “There is no limit to how many Oreos can go into your yogurt or what type of flavor mixture you can create. We enjoy the consumer always being happy with the product and to have total control over their frozen yogurt, whether they are coming in for a healthy treat or just a quality product.”