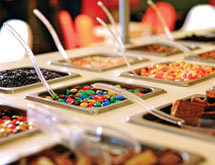 At Orange Leaf Frozen Yogurt’s stores, customers not only find a broad selection of frozen treats, but also a lively social environment, co-owner and CEO Reese Travis says. On any given afternoon, “You can see anything there from a [meeting of executives] to a student council group,” he says.

Based in Oklahoma City, Orange Leaf operates a chain of 305 self-serve stores that offer multiple flavors of frozen yogurt. “We have a lot of options,” Travis says.

Orange Leaf started operations in San Francisco in 2008, and caught the eye of Travis, who became a franchisee with his own locations in Norman and Lawton, Okla., and Wichita Falls, Texas. After falling in love with the concept, he and several investors began lining up additional markets they wanted to pursue.

“One of the reasons we fell in love with Orange Leaf was that it had mass appeal,” Travis says, explaining the stores attracted families and students. “That universal appeal [is key].”

In 2009, Travis and his partners approached Orange Leaf’s owners about buying the company. At the time, the company had 15 stores. “We’re currently at 305 stores,” he says, adding that the company has locations in 39 states and overseas. “We just received our third franchisee agreement in Australia.”

It also is negotiating agreements in Canada and China. “We’re right there at the top of the pack when you look at the entire frozen yogurt industry,” Travis says.

Client Focused
Seventy percent of Orange Leaf’s customers are women, between the ages of 17 and 35, Travis says. Many are mothers looking for afternoon snacks for their children. “They tend to find us first,” he says. “Eventually, they get the dad in here and he falls in love.”

To keep them coming back, Orange Leaf makes sure they feel welcome. It continually trains employees on service and uses initiatives such as the Ounce Back card, which enables patrons to earn discounts. “Focusing on the customers and supplementing that with a strong brand makes the customer experience top notch,” he says.

Strong Support
Orange Leaf also focuses on franchisee support. Travis says he personally enjoys explaining to new franchisees that they can count on the company for the backing and encouragement they need.

“[I tell them], ‘Don’t think that you have to take it all on your own,” he says, adding that the franchisees also support each other through the OL Insider network, which allows them to talk over the Internet. Interaction is essential to being a franchisee, Travis asserts. “We’re looking for people who are excited to interact with the Orange Leaf network,” he says.

Travis is proud of his team at Orange Leaf. “We’ve got a great team of people who work tirelessly every day,” he says, adding that these include Director of Brand Development Karley Hofer. “She does an amazing job for us.”

Hofer manages the firm’s marketing team and campaigns. “She’s an example of a representative of Orange Leaf that’s not just working with the team,” Travis asserts. “She eats, sleeps and breathes the Orange Leaf brand.”

This level of staff commitment will be critical as Orange Leaf moves forward. “We’ll be operating in four countries next year,” Travis says, adding that it has the goal of operating 1,000 locations by 2017. “We’ll continue to build our international team. “We [look forward to] opportunities that Canada and China can bring us.”