Back to Profile Gallery > Ottens Flavors 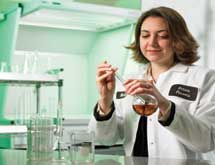 When people eat, they usually do not want their food to have a bitter taste to it, but instead, a succulent, tantalizing flavor that makes them take another bite. At Ottens Flavors, business re­v­olves around making sure food has that effect. The Phila­del­phia-based company is the oldest flavor house in North America, CEO Richard Robinson says. Founder Henry H. Ottens started the company in 1884, but under the current management team, it has grown to serve large food and beverage manufacturers and currently has sales in more than 40 countries.

According to Robinson, Ottens Flavors’ most popular products are such traditional flavors as vanilla, choc­olate and strawberry in the sweet category, with chicken and beef making up the savory end of the spectrum. How­ever, over the last five years, Ottens has invested heavily in the area of functional innovation and technical expertise to align with the well-established health and wellness trend.

Ottens recently created its InhiBITTER line of functional flavors, which are used to mask the unpleasant taste of some ingredients. “There’s bitterness even in some whole grain-based foods,” adds Peter Mazeiko, vice president of R&D. “[Our products] are masking some of the graininess that comes through.”

Its team also includes Marketing Man­ager Susan Tracey, who has 25 years with Ottens. She notes that the longevity has been largely due to the fact that the company looks at its staff as its main asset. “We treat them as such,” she says. “We have fantastic ben­efits that keep people loyal to our com­p­any.”

Tracey also credits the company’s suc­cess to its ability to serve its customers better than most of its competitors. “We are able to do what a lot of our competitors are not able to do,” she says.

Although many competitors are high-tech, Ottens’ time to market usually beats them. “Almost 90 percent of our samples go out the same day and we try to ship trial orders between three to five business days,” she says. “We structured our facility as well as our processes and procedures with these goals in mind.”

Ottens Flavors is very active in charity work. As a partner with Greater Philadelphia Cares, it has held clothing and food drives. Additionally, the company has contributed to the Philadelphia School Sys­tem, which

has suffered from large bud­get deficits.

“[We] helped beautify their areas,” Tracey says, adding that Ottens Flavors also gave to the Boy Scouts of America and Haiti disaster relief.

These activities are part of Ottens’ over­all sustainability program. “We just recently switched from our old utility com­pany and procured the services of World Energy, which provides us with 100 percent green power,” Tracey notes.

This range of charitable work, Tracey notes, strongly reflects the spirit of founder Henry Ottens, who was an entrepreneur with multiple bus­i­nesses, and had a reputation for being gen­erous. For instance, Ottens do­nated a large piece of beachfront property in North Wildwood, N.J., to L. Ida Dukes, who built the Children’s Fresh Air Home in 1911.

Dukes built a beautiful Victorian house for the purpose of host­­ing disadvantaged, intercity children so that they can spend time on the beach.