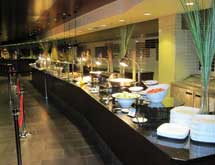 When the Portland Trail Blazers take to the court at the Rose Garden Arena in Portland, Ore., another team goes to work on ensuring the NBA team’s fans leave with satisfied appetites.

Ovations Food Services, the arena’s foodservice vendor since 2005, offers a number of dining and snack options for patrons attending games, concerts and other events in the 20,000-seat arena.

The company not only staffs the concession stands and specialty restaurants in the arena, but it operates ever-expanding premium offerings such as catering and service to the arena’s club level and luxury suites, General Manager Tony Hendryx says.

“There are a lot of action stations there,” he adds. “The level is 360 degrees around, and you can’t walk too far without finding a food station.”

Ovations Food Services provides foodservices to convention centers and sports arenas throughout the United States. The Lutz, Fla.-based company prides itself on its “Everything’s Fresh!” approach to concessions and food, Hendryx says. Rose Garden Arena is one of the company’s largest accounts.

“If you walk up to one of our concession stands, you’ll never find a hot dog or a hamburger that’s wrapped up and stuffed in a drawer somewhere,” he adds. “All food is made to order throughout the entire company.”

“There are probably very few arenas of our size in the United States that do a fresh, never-frozen burger and hot dog program,” Hendryx states. Ovations also offers a number of unique offerings, including the Oregon albacore tuna grilled panini sandwich on sourdough bread from a local Beaverton, Ore., bakery, topped with aged cheddar cheese from Tillamook Creamery, which is another local brand.

“We’ve really tried to focus on the quality aspect, with the thought process of providing the freshest local product attainable,” he adds.

Hendryx considers the offerings, as well as other practices including offering compostable containers, recycling, and employing a sustainability coordinator to be an extension of the Rose Garden Arena’s environmentally friendly approach. The building is LEED Gold certified by the U.S. Green Building Council.

In addition to its environmental practices, the company also looks to improve its community through charity and volunteer efforts.

The company’s “Food For Funds” program works with 25 Portland-area charitable organizations by training volunteers to staff Rose Garden concession stands throughout the year. The participating organization receives a portion of the sales proceeds from the stand it operates. The program has raised more than $10 million for local charities in its 15 years of existence, Hendryx says.