Back to Profile Gallery > O&W Inc. 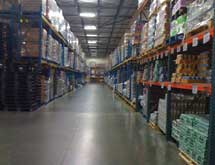 Over the course of 77 years as a beer and wine distributor, the folks at O&W Inc. have seen numerous changes in the beverage industry. With each flip of the calendar, the company has worked to adapt. From the perils of prohibition to today’s sluggish economy, O&W has remained agile. As a result, the company has become one of the most successful beverage distributors in the Midwest. As the beverage industry continues to evolve, and the economy continues to quiver, O&W stays focused. Already, a number of changes are taking place at the company.

A Change in Plans

Prohibition in the United States changed the course of business for many alcohol-based operations across the country. To keep the cash flow going, some tavern and saloon owners went underground with their alcohol sales, while others reorganized their business to stay afloat during the country’s “noble experiment.”

William Seagert of Ann Arbor, Mich., ran a tavern when the 18th Amendment was passed. After alcohol was deemed illegal in the United States, Seagert adapted his business to abide by the law. He traded hops for birch – birch beer, that is, a non-alcoholic brew similar to root beer.

Seagert ran truck loads of birch beer from the Stroh Brewery Co. in Detroit – where it was manufactured – back to the Ann Arbor area where he served it to patrons and distributed it to other taverns in Ann Arbor and beyond, keeping the company afloat.

When prohibition was repealed, and rounds of alcoholic drinks were again ordered, Seagert had his tavern and a strong beverage distribution business. Opting to man the bar and not the truck, he handed over the distributorship to his son-in-law, James O’Kane.

Five generations after he started his birch beer runs, Seagert’s family is still operating the distribution business he developed. As the family business has grown to become one of the largest distributors in Michigan, those in charge have not relinquished ties to Seagert’s business philosophy: Focus on customer service. “We outperform in customer service,” notes Kit Morgeson, vice president of marketing for O&W. “We really differentiate ourselves in the way we organize our company, how we call on customers and the frequency in which we call on our customers. Most of our sales team has been with their clients for 10 or more years. This a testament to our customer dedication.”

Echoing the adversity Seagert faced when the U.S. government deemed alcohol illegal, the current generation of O&W leaders have their fair share of adjustments to make in these difficult times. Over the past several years, the company has worked diligently to overcome issues such as bottle tax regulations, smoking bans in bars and restaurants, and a sluggish economy that has deflated alcohol sales across Michigan.

But, O&W knows how to react to change. “As companies are adjusting to the shakeup, it’s all about keeping inventory controls right,” Morgeson says. “Listening to our market and to our customers is extremely important because it helps us to adapt to change.”

In addition to acting quickly to address the needs of clients, O&W has applied substantial effort to addressing the needs of the community and the environment. According to Morgeson, the company has a long history of giving back to the community by way of charitable contributions. From acting as summer festival sponsor to area hospital fund contributor, O&W has helped in all the ways that it can.

The same can be said for the company’s move to greener operations. Several months ago, O&W enacted a number of green alterations to its business, including the conversion of its delivery fleet to biodiesel fuel and the replacement of warehouse lighting to energy-efficient and motion-sensor lighting. The company also installed ceiling fans throughout its warehouse to circulate warm and cold air, relying less on heating and air conditioning units.

“We are fully committed to supporting our hard-working employees, who are the backbone of our continued success, and continuing our investments in clean energy and energy efficiency programs,” Jim Wanty, president of O&W, said in a statement.