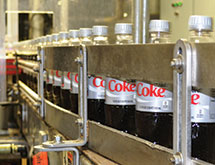 The classic glass Coke bottle is a packaging icon, but it represents less than 2 percent of sales today compared to the more than 70 percent it represented in the 1970s. The bottling industry has gone through multiple changes in the 95 years that the Ozarks Coca-Cola/Dr Pepper Bottling Co. has been bottling and distributing beverages, and those changes will continue.

“There have been a lot of changes in our business,” President and COO John Schaefer declares. “I was thinking of all the changes that have occurred. I started in this business in 1973 right out of high school and worked my way through college for four years off a Coke truck. When I started, we sold about 20 different SKUs. Today, we’re approaching 500. The beverage space in the store is fairly static in the sparkling soft drink sections. We will battle with Pepsi and 7-Up for what percent of that space we get and do that all day long, but what’s really changed is how many more aisles of the store we are represented in today.”

The Ozarks Coca-Cola/Dr Pepper Bottling Co.’s portfolio now includes waters, energy drinks, teas, coffees, drops and juices. “We used to be 99 percent sparkling beverages or colas,” Schaefer points out. “Today, we’re approaching a 70:30 split with the 70 being what we call sparkling beverages. We used to be just in that one sparkling beverage aisle. Now we have a separate water section and energy section, tea, coffee, sports drinks, and just so many different areas that in some stores we can almost go down every aisle and find something that is coming off of our trucks. So the space in the store really has grown, but also the different areas of the store that we address.”

That same variety is found at the fountains the Ozarks Coca-Cola/Dr Pepper Bottling Co. handles. “When we go to a restaurant that’s doing a fountain, with the number of brands that we carry today what used to be a little six-head machine now may have 20 different fountain heads,” Schaefer says. “Now we’re doing teas, coffee, sports drinks, and the variety the consumer is looking for has evolved into multiple heads. As the consumer’s taste or desire has shifted, our customers have asked for something different. Our industry has been successful for over 100 years because we react quickly and effectively to meet our customers’ and consumers’ needs.

“Right now, I feel really good about where Coke is going and where our brands are heading,” he continues. “I think people are beginning to listen to each other and starting to find that common ground where both sides can win. When that starts occurring, it’s such a strong thing.”

The End of Returnables
The Ozarks Coca-Cola/Dr Pepper Bottling Co. manufactures in Springfield, Mo., approximately 30 percent of the products it distributes throughout south-central Missouri. The company has sales and distribution branches in Springfield, Bolivar and Rolla, Mo. The majority of its customers are grocery, convenience, mass merchandiser, value, drug and foodservice establishments, including restaurants, bars, at work and hotels. The Ozarks Coca-Cola/Dr Pepper Bottling Co. is the exclusive distributor of its products in its market area.

The company is one of a few independent Coca-Cola bottlers in the United States that actually bottle the product and not just distribute it. “It used to be that everybody produced, and it was actually part of our bottling contracts,” Schaefer says. “Pre-1980s, returnable glass bottles were the dominant package. But as returnable glass bottles became history, the bottling business changed. As time went on, machinery became a lot more efficient and effective. It became that one company could produce for several neighbors at a time and be more effective for all of them and share in that cost savings.”

Blending Drinks
The Ozarks Coca-Cola/Dr Pepper Bottling Co. bottles all the drinks in the Coca-Cola and Dr Pepper family of brands. “We go through quite a few flavor and packaging changes in the course of a week,” Schaefer says. The company produces its PET products and purchases the cans, packages and still brands it sells. “We do multiple sizes of PET bottles–12-ounce, 16-ounce, half-liter, 20-ounce, one-liter, two-liter and 24-ounce sizes,” Schaefer says.

The company manufactures no products in glass bottles anymore. “Back in the 1970s, we sold returnable glass,” Schaefer remembers. “Today, it’s very little glass. For a while, it went to 12-ounce cans, but it’s now swinging from cans and going to PET packaging. We’re seeing a little bit of a resurgence in glass, as the Coca-Cola contour bottle is celebrating its 100th birthday, but it’s not returnable.”

The production equipment can be adjusted for the seven different sizes of containers that the company fills. The equipment includes depalletizer, rinser, filler, labeler, hi-cone, case packer, shrink-wrapper and palletizer. Some products are produced in multipacks or in single containers, and some are shrink-wrapped. “Our employees change the line depending on what they run,” Schaefer explains.

The plastic bottles come into the bottling area already blown and on a pallet. The depalletizer removes each layer of bottles in a group, and then they travel a conveyor to reduce the mass to a single row and each bottle is cleaned at the rinser. Then the bottles are sent to the bottling line for filling, and preprinted labels are glued onto the bottles. The entire operation is automated under employee supervision. The company bottles products in the Coca-Cola/Dr Pepper family for itself and others.

Transportation Fleet
Schaefer estimates that the Ozarks Coca-Cola/Dr Pepper Bottling Co. covers approximately a 200-mile radius around its headquarters in Springfield. It has three semitractor trailers for long hauls, approximately 50 trucks for local routes and another 50 pickup trucks and light vehicles. It also employs third-party trucking companies when necessary. “The freight cost is just skyrocketing,” he points out.

The Ozarks Coca-Cola/Dr Pepper Bottling Co. used to do its own in-house vehicle maintenance, but it is now done by outside companies. It also has investigated using vehicles powered by condensed natural gas and hybrid vehicles.

The company trains its own employees as CDL drivers. “We’re finding that we have better luck if we train our own drivers,” Schaefer says. The company promotes from entry-level positions, such as merchandisers who move products out of the back of stores, or employees who load trucks at night. “For positions with specific skills, such as key account people, we promote from within and search externally to get the best skills and fit,” Schaefer says.

The company is waiting until its 100th anniversary to have a major commemoration. He attributes the company’s 95-year longevity to many factors.

“Not all those years were easy,” he cautions. “So if I had to sum up our success, I’d say it’s active ownership – willing to conscientiously invest in the business and its people – and really good employees. We’ve retired in the last few years several employees that have had 40-plus years with our company. So we have had a high degree of loyalty.”