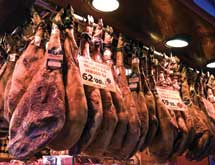 As the owner of Pacific Pork & Food Products Inc. – a meat wholesaler celebrating 15 years of service this year – Strackbein understands what it takes to achieve success in the industry. She entered the business when she married Rod Koetz in 1993, a 30-year veteran of the industry who liked to boast that he was one of the few jobbers that had never filed bankruptcy.

“We would have customers that go bankrupt on us,” Strackbein says, noting the nature of this business.

To survive in the early days, Strackbein explains that she acted as the personal banker for the company, exchanging checks between Koetz and herself. “I would give him a big check on Friday and he would give me one that would be good the following Friday,” she says. “I knew it was a good check because he was my husband. In the meat business, you need to have big pockets.”

Also in the meat business, companies need to move quickly to make deals and solve problems. Since it is not a commodity with a long shelf life, it is imperative that business runs smoothly.

“If there is a problem, you better solve it right away because meat is very perishable,” Strackbein states. “So much goes on with deliveries – the right temperature and so on – that you better know who you are dealing with so there is trust and everything moves quickly.”

Pacific Pork has two offices in California – its headquarters in Vernon and another in Riverside. Its Vernon location focuses on specialty products, many of which are sold to proprietors of the Asian food markets, sausage makers and Las Vegas venues – generating the majority of the company’s sales. Riverside is focused on large industrial contracts acquired by Pacific Pork.

For the majority of its products, Pacific Pork buys directly from Tyson Fresh Meats, Seabord and Pork King. It also buys from a few local suppliers in the Los Angeles area, ones that Strackbein says the company has been dealing with for a number of years with an understanding of how to conduct business.

To develop supplier relationships, Strackbein breaks it down fairly simply, “You make sure never to miss a payment deadline you’ve promised them.”

Pacific Pork sells to meat packagers and manufacturers, grocery chains and markets. Not only does the company have domestic customers, it also has a strong clientele in those looking to ship to international markets such as Japan, where the company provides much of its specialty products.

Focused on the Bottom Line

When it comes to the most difficult challenge for Pacific Pork, the financial planner again comes out of Strackbein.

“It’s making sure that we get paid,” she states. “Because meat is a perishable product, the day it’s delivered it can’t be taken back. There is a lot of chicanery that goes on in the meat industry in that people say [the meat] was delivered one degree below what it should have been, and basically you have to renegotiate that contract.”

To solve this, Pacific Pork rarely looks for new suppliers or chases business with people it does not have a prior relationship with. “We try not to work with people we don’t know, and there are some we have been working with for 40 years,” Strackbein says.

Strackbein says she stands behind the products Pacific Pork sells. “We offer a very competitive price because we run a very lean, clean business model,” she asserts. “There are no fancy offices, no five layers of management, we are just focused on the bottom line – our bottom line and the bottom line of our suppliers and customers.”