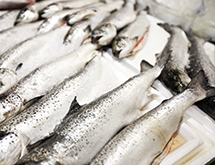 From its modest start in 1941 selling fish out of a car trunk, Pacific Seafood has since grown to employ more than 2,500 professionals at 37 facilities, with processing plants stretching along the Pacific Coast and distribution facilities in seven states.

“Although the company has grown in size, it is still family-owned and family-focused while always being dedicated to delivering the best seafood products and the best customer service anywhere,” Pacific Seafood says.

With processing facilities from Alaska to Baja California, Pacific Seafood Group is one of the largest seafood companies in North America and the largest seafood processor on the Pacific Coast. It grew based on hard work and strategic acquisitions and mergers. Pacific Seafood Group is now a vertically integrated company that emphasizes food quality controls and product safety from ship to shore to store. “Quality is big time in this business,” said Sales Manager Jerry Boisvert in a broadcast profile. “If you have a reputation for quality, you get the customers.” The company’s vertical integration allows for investments that have lowered seafood prices.

How It Works
At its plants, fish products are iced, weighed, cut and packed, with product moved on a conveyor belt in 50-pound bins. On typical days, more than 15 different species are processed with tags showing which vessel and fileter processed each catch. In fact, the fish are tracked and identified throughout the process with tracking tags. Pacific Seafood builds quality control into each step of its seafood processing for greater oversight of product safety, the company says. It has 30 operating companies and 8,000 customers.

Pacific Seafood is active in promoting a healthy and sustainable seafood industry. Pacific Seafood is under the leadership of President and CEO Frank Dulcich, the founder’s namesake and grandson. “Pacific Seafood is committed to the stewardship of a sustainable resource and fully supports responsible management practices,” Dulcich said in a statement. It participates in the global seafood trade market and is a member of the West Coast Seafood Processors Association. Industry trends affecting Pacific Seafood Group, and food processors in general, include market consolidation, increased price competition, greater consumer health consciousness and increasing popularity of organic and natural foods.

The plant is equipped with the most advanced processing technology and cool chain security to ensure freshness, cleanliness and quality. “The facility brings substantial quality oversight, cold storage, cool handling and third-party inspections for guaranteed assurance,” said Tyson Yeck, general manager of Pacific Seafood Canada operations. “We believe this will not only be the nicest Groundfish plant in Canada, but it will be the newest in British Columbia and the only one that guarantees world-class traceability systems second-to-none.” About 65 employees work at the new plant.

Pacific Seafood Group rose to the top with hard work and good partnerships with fishermen and associated industry companies. Pacific Seafood production workers, for example, sometimes work 85-hour weeks, especially during Whiting and Sardine season in Oregon. Such hard work comes with the rewards of success. The company is dedicated to the personal growth, health and continued learning and improvement of every individual at Pacific Seafood. For example, it offers continuing education operating Pacific Seafood University, with accreditation through a partnership with Ashford University, which offers more than 600 training and leadership development classes for Pacific team members.

Most Admired
Pacific Seafood was named the most admired company of the year in 2013 by the Portland Business Journal. “We are proud to be an Oregon family-owned company and thankful for our fellow Oregonians that we do business with providing quality, healthy seafood,” said Dulcich. “It is a great honor to be recognized as a company worthy of this admiration.”