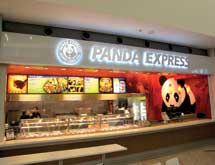 Established in 1973, Panda Restaurant Group is one of the largest and most successful Chinese restaurant chains in the United States with close to 1,500 locations in 42 states, 20,000 employees and more than $1.6 billion in annual sales. This year, the Rosemead, Calif.-based company plans to open more than 100 new restaurants, some of which will be outside U.S. borders, says Robert Lustig, senior vice president of Panda Express International.

Panda officially began its international expansion when it opened its first Panda Express in Mexico in early September.

By January, the company had three restaurants open in Mexico City, and it intends to add 10 to 12 more by the end of this year. Panda had been planning an international expansion for quite some time, according to Lustig. “We spent significant time evaluating Mexico as a natural extension of our brand outside of the U.S. because of its geographic proximity,” he says.

During its numerous visits to Mexico, Panda was able to find a partner that shared the same business philosophy and principles that have made both organizations so successful in their respective countries. “We were really impressed with the quality of people they have on their team and the quality of people that work in their restaurants, and the way people work with each other within their organization is very similar to how we go about our business at Panda,” Lustig explains. “My belief is that it starts with the cultural fit. There are innumerable challenges associated with building a business outside of the U.S., and the only way to achieve success is to have a strong cultural likeness between the two organizations.”

Strategies for Success
There are two parts to a successful international expansion, according to Lustig. “The first one is establishing the brand firmly in the country, which can take anywhere from two to three years,” he says. “The second part is scaling the brand up and getting into aggressive development plans going forward. Right now, we’re still in the forming-and-establishing-the-brand phase. We will continue to grow our business predominantly in Mexico City for the foreseeable future and then expand into other major cities throughout Mexico.”

Panda will begin its operations in Mexico with what Lustig refers to as its standard menu offering, which will undoubtedly include its best-selling orange chicken recipe. “There is perhaps a little bit more demand for beef in Mexico than in the U.S., so we may look into offering a variety of beef dishes,” he says. “There is also an opportunity to integrate some traditional ways of serving our product in Mexico that may not necessarily work in the U.S., such as introducing wraps or using tortillas as a way to introduce our food.”

The most significant change in Mexico that Panda will undertake this year is implementing a delivery system, a service that it elected not to do in the United States. “Mexico City has a population of 25 million people in a geographic area the size of Los Angeles,” Lustig notes. “The delivery of food [via motorcycles with hot or cold storage boxes] is an essential part of the restaurant business model.”

Panda intends to continue its North American expansion by opening stores in Canada this year, according to Lustig. “It’s really a remarkable time for Panda as we look beyond the United States borders to expand into other countries around the world, bringing with us not only our food, but also our culture,” he emphasizes.