Back to Profile Gallery > Papa John’s 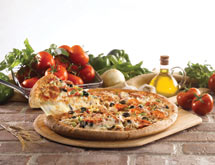 For Papa John’s, it’s all about the quality. Offering fresh and tasty ingredients distinguishes it from others in a crowded pizza market, the company says. “We have better ingredients, better pizza. That really is what we are all about,” says Tony Thompson, president and COO.

Dough, cheese and toppings
Papa John’s success begins with its ingredients. Papa John’s pizza is prepared using fresh, unfrozen dough, which is placed in store coolers long enough for it to proof and rise. Once ready, it is hand-tossed.

The proprietary dough does not use “dough-conditioners” such as sodium stearoyl lactylate or mono- and diglycerides. The high-protein dough made with unbleached wheat flour and filtered water gives the pizza dough its balance of flavor and chewy crust. The thin crust has a pencil-thin edge.

Papa John’s “better ingredients” also include the pizza sauce, made from fresh California tomatoes. Six hours after the tomatoes are picked, the sauce is produced and minimally heated to retain flavor. It is shipped in #10 steel cans instead of plastic pouches. The sauce is not manufactured and doesn’t include high-fructose corn syrup, artificial colors or artificial flavors. Instead, it’s simply tomatoes, virgin olive oil, sunflower oil, spices, and a touch of salt and sugar.

The pizza cheese is made from 100 percent real mozzarella and high-quality skim milk. All cheeses have minimal preservatives to maintain freshness and to ensure consistency and quality across many restaurants. Italian sausage is 100 percent pork without fillers and green peppers are shipped several times per week for freshness. Peppers are not frozen or vacuum packed and are sliced daily.

Thanks to all of this attention to quality ingredients, Papa John’s “presents a better pizza to consumers, and they know the difference,” Thompson says. “The focus on quality has been consistent throughout our 30 years’ history. We are almost religious about it. We don’t compromise on our brand standards.”

Three Decades of Pizza Pie
Papa John’s is the No. 3 global pizza delivery chain, according to Pizza Today. As of last year, there were 4,163 Papa John’s restaurants in operation, consisting of 696 company-owned and 3,467 franchised restaurants operating in all 50 states and in 35 countries and territories. There are 48 restaurants in Beijing and north China alone.

“Papa” John Schnatter founded the company in 1984 and serves as its spokesman. The chairman and CEO has become something of a celebrity thanks in large part to his energetic TV spots.

Schnatter founded Papa John’s in 1984 after selling his prized 1972 Camaro for $1,600 to help save his father’s tavern. He then purchased used pizza equipment, knocked out a broom closet in the back of the tavern and began selling pizzas to the tavern’s customers. His pizzas proved so popular that one year later he was able to move into an adjoining space.

In 2009, after years of wondering whatever happened to his beloved Camaro, Schnatter decided he wanted to buy it back but couldn’t find it. So he drove across America in a replica of the Camaro, searching for the original. He finally located the owner near Louisville and he purchased the auto for $250,000. The original Camaro was then placed on display at company headquarters and Schnatter celebrated the reunion by giving away free pizzas to anyone who owns a Camaro.

Tuna, Calamari and Veal
Papa John’s current expansion plans are primarily outside of the United States and Canada. There is generally less competition and marketing required in many overseas markets but the overall pizza segment of the market could well be smaller. The product is also tailored to local tastes. In Egypt, for example, Papa John’s pizza toppings include tuna, calamari and smoked veal, and deliveries are made on scooters for faster delivery times in heavy traffic.

Papa John’s has more than 1,000 international stores in 35 nations. “Russia is a really great market for us,” Thompson says.

The United Kingdom is the country outside North America with the most Papa John’s. This is a “very, very heavily competitive and penetrated area,” Thompson says. Papa John’s opened stores in the UK without television advertising support, “just basic guerilla tactics growing the market with product quality,” and the company now has more than 200 stores there.

The Asia/Pacific market is also an area of focus for the future, Thompson says. Latin America does extremely well, and Papa John’s has seen “really nice, healthy growth” in the Middle East, he adds.

When Papa John’s first began its big international push four years ago “we were not as sophisticated,” Thompson admits. “We made our mistakes and learned from them.” Perhaps Papa John’s opened too many new stores overseas a bit too quickly, he says, but it “learned a lot early on, shored things up, focused on quality and now the international team is doing well across the board.”

In some ways, Papa John’s international expansion is similar to its business when it first began expanding domestically. It is taking on its two larger and more established competitors, Pizza Hut and Dominos. These are “big businesses with 30-year head-starts,” says Steven Ritchie, senior vice president, global operations and global operations support and training. It will use the same strategies it did to grow after its 1984 founding in America, Ritchie says.

The company sponsored a college football bowl game from 2006 to 2010 known as the Papajohns.com Bowl game in Birmingham, Ala. In 2010, it inked a deal to become the official pizza of the National Football League. Star quarterback Peyton Manning serves as a spokesman and also owns 25 franchise locations in Colorado.

In addition to football, Papa John’s also is The Official Pizza Sponsor of the Football League in the United Kingdom. It also partners on a team basis in most major sports markets.

“Sports and pizza seem to go extremely well together,” Thompson says. “It has a relevancy consumers react to.”

As pizza is a “social type of product, made for gatherings,” and sports matches tend to be associated with these gatherings, Papa John’s marketing considers it a natural fit. Furthermore, from a TV advertising standpoint, sporting events circumvent DVRs and TiVos for added ad value.

High Technology
“How consumers order pizza today is vastly different than it was 10 to 15 years ago,” Thompson says. “Technology is a key part to how we reach consumers.”

Papa John’s was the first pizza company to roll out online ordering, which revolutionized the industry and added efficiency to its operations. It uses an advanced dynamic resource control infrastructure, linking retail outlets to operations to provide real-time data to national headquarters. This allows for the allocation of deliverymen and pizza ingredients to areas experiencing surges in pizza demand.

The company’s 10 domestic commissaries, or quality control centers, employ the latest innovative technology for production, logistics and communications with vendors. Papa John’s is also the only pizza company in its category to offer a rewards program – Papa Rewards – which provides frequent customers with discounts and has been active utilizing text messaging and social media.

Being “in the front of the pack” technologically has helped Papa John’s in many ways, Thompson says, by reaching out to customers and suppliers for better relationships to help them emotionally link to the brand.

In the Community
Papa John’s is dedicated to community involvement. “Papa John’s is all about people,” Thompson says. “We certainly want to give back.”

He notes Papa John’s has been engaged with disaster relief efforts and assists the Salvation Army.

“Pizza is a people business and [community involvement] is an important part of engaging with our customers,” Thompson says.

Since 1996, Papa John’s and John and Annette Schnatter have donated more than $20 million to the hometown University of Louisville. This includes a $5 million gift in 1996 to fund construction of Papa John’s Cardinal Stadium.

In 1998, an additional $5 million was donated to fund construction of Cardinal Park with soccer, track and softball facilities. In 2007, the Schnatters and Papa John’s pledged an additional $10 million to help fund the expansion of Papa John’s Cardinal Stadium, which was completed in 2010.

“It is very people-based here,” Ritchie says. “We believe it is not a monetary transaction. It is about relations and anything we give comes back three-fold.”