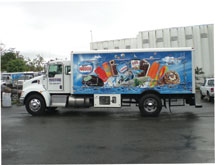 There aren’t many places on Earth that get as hot as the Caribbean,which makes a cool treat all the more important. Puerto Rico-based Payco Foods Corp. knows that better than anyone, according to CEO Francisco Frei. The company is a revival of a brand known to Puerto Ricans for more than 70 years, and it recently re-launched its namesake brand to supermarkets after a hiatus of more than 10 years. As the company looks head to its 20-year anniversary in 2013, Frei says Payco Foods already has a strong market share in the Caribbean region and is excited about the opportunity to expand that share.

The current incarnation of Payco Foods was founded by a Puerto Rican investor in 1993. In 2005, the company was acquired by Nestlè, the world’s largest food company. Even before the Nestlè acquisition, Frei says Payco Foods enjoyed strong market penetration throughout Puerto Rico.

“We have the biggest ice cream distributor in the Caribbean, not just in Puerto Rico,” Frei says. The company accounts for nearly 65 percent of all ice cream sold in Puerto Rico, and it distributes products to more than 14 other islands throughout the Caribbean. The company also distributes DiGiorno frozen pizza in Puerto Rico. Frei says competition includes supermarket chains, other local distributors and multinational firms. However, Frei says the Payco Foods has the infrastructure, brand recognition and service in place to remain the biggest distributor in the region and to continue building on that.

Supply Chain
It’s only natural that food distributors pay close attention to their supply chain and logistics, but that takes on added importance when that distribution takes place on and between islands in a steamy climate. Frei says Payco Foods prides itself on being able to deliver products to its customers throughout the Caribbean under some challenging circumstances. The company imports products from the United States as well as other Latin American markets such as Chile and Mexico.

“I believe one of our key strengths is the level of service we provide,” he says. “One of our advantages as the distributor is that we can consolidate product here in Puerto Rico for those small islands that otherwise would not be able to buy all the variety that we offer, given the fact that by their size they don’t have the capacity to buy a complete container of one product.”

With a fleet of more than 50 trucks distributed throughout its service area, Payco Foods has the ability to deliver goods quickly and efficiently to customers. What’s more, the capacity Payco Foods has allows it to make frequent deliveries to meet its customers’ needs, as many as four or five times a week if necessary.

Frei says the most important thing about Payco Foods’ supply chain isn’t just its capacity, but also its ability in delivering a frozen product without affecting its quality. He says the company has that capacity to build a cold supply chain across the entire Caribbean. “Payco Foods works diligently with its network of local partners to keep its products in optimum condition and therefore providing the best product to our consumer,” he says.

Big Changes
Even though ice cream always is popular, that doesn’t make Payco Foods immune from changes or emerging trends in the marketplace. The most substantial challenge the company has had to deal with in recent years is the economy, Frei says. Before the recession hit several years ago, consumers in the Caribbean were regularly buying ice cream and other luxury items at their normal price points. Recently, however, consumers have been reluctant to make such purchases without a sale or other type of promotion. This has made it more difficult for Payco Foods and other distributors to keep revenue levels where they want them to be, but Frei says the company has been weathering the storm relatively well.

On a positive note, the company recently returned an old favorite to store shelves. Payco Foods announced earlier this year that it was reviving the Payco brand of ice cream to supermarkets in Puerto Rico. The company launched the new line with vanilla, chocolate, cookies and cream, chocolate chip and Neapolitan flavors.

Frei says 2012 has turned out to be a good year for Payco Foods so far, but the best is yet to come. Frei expects greater growth in the region starting in 2013 as the economy continues to improve gradually.