Back to Profile Gallery > Peppers Unlimited of Louisiana Inc. 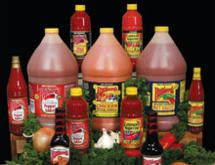 Although Peppers Unlimited of Louisiana Inc. is a global business with more than 500 customers in foodservice and retail, most people don’t know about the company, President George Bulliard Sr. admits. Its business consists of 65 percent private label bottles and 20 percent bulk hot sauce sales. About 15 percent of its products carry its name. “We’re expanding our product line more and more,” Bulliard says.

Based in St. Martinville, La., the company focuses on pepper sauces, primarily cayenne pepper sauce. It makes sauces from cayenne, jalapeno, habanero and tabasco pepper for private label retailers as well as the foodservice industry including hospitals, schools, military and restaurants in the United States and worldwide in countries such as Middle East, Africa, Russia, Canada, Mexico, Europe, Korea and Malaysia.

“It’s a different formula going overseas,” Bulliard says. “Peppers Unlimited manufactures to meet customers’ specifications. What they want is what we formulate and ship to them. We are experts at customization.”

The company typically makes about 600,000 to 750,000 gallons of hot sauce every month for the bulk, foodservice and industrial industries, he adds. “For restaurants, it’s mainly back of the house service,” he adds. “Chances are you have enjoyed a Peppers Unlimited sauce without realizing it.”

Customers’ taste profiles have changed over the years, he says, and the cayenne and jalapeno flavors are currently the most popular. “Cayenne Pepper has more flavor than heat,” he explains, and people prefer flavor to fire. “We sell more than 100 million bottles a year of cayenne pepper sauce.”

Bulliard’s family has been in the pepper business for more than 100 years. In 1910, his grandfather created the bayou’s first commercially sold hot sauce. “One hundred years and four generations later, we are still in the close-knit community of St. Martinville,” says Bulliard, who has worked in the family business for about 50 years. “Right now, I’m handing over the helm to my son John Bulliard. He’s our new taste master; he tastes the sauces for quality and consistency. He also designs the bottling lines and he makes sure the product is where it’s supposed to be.” Bulliard’s other children, Leslie, George II and Michelle, also work in various capacities for the company. “I grew up in the hot sauce business and all my kids grew up in it,” Bulliard says. “We’ve been doing it for so many years – it’s in our blood. We’re still making the same flavor profile we developed more than a century ago.

“I think having a family business is one of the main things that sets Peppers Unlimited apart,” he notes. “We’re more hands-on and are watching the product closely so we can keep the legacy alive.”

The company has grown an average of 10 percent each year for the past 15 years – its biggest ever growth spurt. “Cajun products are growing,” Bulliard says. “People enjoy seasoning more and more. People up north and west like a variety of flavors, but they like cayenne pepper sauce the best.”

Peppers Unlimited distributes its products worldwide, and bottles more than 100 million bottles a year. “We use so much plastic that a local company opened up to supply our bottles and caps,” he says. “We’re probably close to No. 2 in the nation in bottling and making hot sauce.”

Bulliard has no doubt that Peppers Unlimited will continue its growth trend for the foreseeable future. “There is so much demand for hot sauce,” he says. “We are continually receiving more orders and new customers. Years ago, we never thought we’d grow so much. There’s no end in sight. The sky is the limit for Peppers Unlimited.”