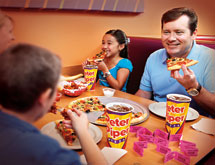 The culture within the Peter Piper Pizza organization is a resemblance of the customers it aims to serve – families. Though it has 35 corporate restaurants and 100 franchise locations domestically and internationally, Peter Piper Pizza has managed to say tight-knit and supportive while providing endless fun and great food – functioning just as family should.

The family entertainment restaurant traces its roots back to Tony Cavolo, who settled in Arizona from the East Coast and owned and operated a mainly pizza carryout business from a 4,000-square-foot facility. In the early ’80s, the company began expanding through franchising and evolved into a restaurant concept that delivers high quality food and is outfit with games and entertainment for the whole family.

Today, the average Peter Piper Pizza is a 10,000-square-foot facility equipp¬ed with not just quality food and the latest games, but also flat screen televisions and free Wi-Fi. Though much has changed in the world since Peter Piper Pizza’s early days – even the rest¬aurant itself – its current president and CEO Joseph Luongo explains that the company’s core mission is still very much successful and very much intact today.

“Everything is always changing especially in the restaurant business,” says Luongo, who came to Peter Piper Pizza in 2008. “We’ve adapted over the years, but we stay true to what our core is and that’s giving value. And now more than ever people are looking for value. We are focused on delivering that value through great food and fun for friends and families.”

Since stepping in, Luongo has led a value-driven focus that simplifies the guest experience. The restaurants began offering bundle packages so patrons can purchase food and game tokens together. The company also increased its focus on technology. For instance, Peter Piper Pizza has offered birthday packages for some time, and birthday party reservations can be book¬ed through the Internet. Online food ordering also will be available soon, and the company launched Facebook and Twitter pages so diners can communicate feedback quickly and easily about their most recent Peter Piper Pizza experience. Luongo says these changes have helped Peter Piper Pizza stay in touch with the needs of the 21st century guest while staying true to its mission.

“When guests come into our restaurant, they expect to have a safe, fun experience with great food, incredible service in a clean environment,” he says. “Even in this ever-changing world, we continue to do that. It’s challenging in this environment with the economy the way it is, but for a family of four or five to come in and have a great meal and a great time together for $30 is important to us.”

The People Behind the Pizza
Luongo says Peter Piper Pizza’s ability to maintain a value-oriented culture in a struggling economy is a credit to those who created its culture in the first place. All of Peter Piper’s franchise locations in Arizona, New Mexico, Texas, California and Mexico are run by just eight separate entities, many who have owned restaurants with the company for 30 years or more. They are as passionate today about Peter Piper Pizza as they have ever been, and Luongo says he is proud to be working with them side by side to continue developing the brand.

Luongo, who has vast experience in directing operations for national restaurant chains, says he was eager to join the Peter Piper Pizza family because of the passion for the brand swelling throughout the organization. Together, the company and its franchisees look for employees just as excited as the brand.

“Both corporate and the franchises look for team members who are passionate about creating a great guest experience and putting a smile on people’s faces,” Luongo says. “You can’t teach that. You can teach someone how to make pizza or how to work a register, but you can’t teach passion.” As a result of that focus, turnover at the corporate restaurants is minimal for managers, and around 60 percent for team members, and most franchisee locations have the same or better results.

Between its employees, eight franchisees and corporate headquarters, Peter Piper Pizza is putting smiles on people’s faces throughout the southwestern United States and Mexico. In fact, the company has 45 franchised locations in Mexico operated by only three franchisees. The company began its Mexico franchise operations in 1991, and so far the company has covered all the country’s major markets except Mexico City. However, Luongo is confident Peter Piper Pizza will be there soon.

Luongo says it is also looking to expand even further within and beyond its southwest base. Last year, four new locations opened: a super-sized 20,000-square-feet location in Tucson, Ariz.; two Texas locations; and one in Cancun, Mexico. “We are focused on adding other countries in Latin America in the future as well,” Luongo continues. “Our brand, with its focus on bringing friends and family together for great food and fun, translates in other countries. It’s truly an exciting time.”