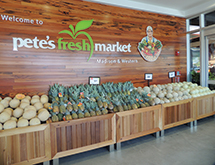 Already thriving in working-class Chicagoland neighborhoods, Pete’s Fresh Market is opening several new grocery stores. “We are a Chicago-based independent grocery company with 10 stores,” Executive Officer Stephanie Dremonas says. “We are in a growth phase and plan to open another three to four within the next couple years.”

The expansions come at an exciting time for Pete’s Fresh Market, which is celebrating its 20th anniversary. Owner James Dremonas has been working in the grocery business since the ripe old age of 16, when he and his brother opened a full service produce stand named after their father in the early 1970s. Pete’s Fresh Market is still very much a family owned and operated business, as Dremonas works alongside many family members, including daughters Marissa, Stephanie, and Vanessa Dremonas.

‘All Kinds of Markets’
Pete’s Fresh Market stores have succeeded in working-class neighborhoods where other grocery companies have not ventured. “We have tackled different locations with various social, economic and racial demographics, and we have succeeded in African-American, Hispanic and Anglo neighborhoods,” Stephanie Dremonas says. These neighborhoods include average incomes ranging all the way from $30,000 to more than $100,000. “We have succeeded in all kinds of markets because of the diversity in our product mix,” she explains. “The communities are very receptive to our focus on quality and aesthetics. Our affordable luxury is available for everyone.”

Vanessa Dremonas says Pete’s Fresh Market is a business pioneer in the Chicago area. “We have created multimillion-dollar developments in neighborhoods no developer would touch,” she says.

In the metro Chicago market, some grocers place stores only in affluent neighborhoods with advanced retail hub economies. Pete’s Fresh Market, on the other hand, is creating entirely new retail hubs. When it recently opened a new store on the West Side of Chicago, for example, “the community was overwhelmingly supportive. It had been a food desert there,” she says. The 68,000 square foot store brought 160 full-time jobs and 100 construction positions to the local economy. To celebrate, Chicago Mayor Rahm Emanuel attended a grand opening there on June 18.

“Before today, the Near West Side lacked convenient access to fresh, healthy food options,” Emanuel said. “Not only is this Pete’s Fresh Market within easy reach of thousands of Chicago residents, but it is helping to grow employment in an area that needed new, steady jobs and will be an anchor for the continued economic revitalization of the neighborhood.”

Construction started in May 2013 on the $18.4 million retail development that is anchored by the Pete’s Fresh Market and includes more than 11,000 square feet of additional retail space. “Pete’s Fresh Market is pleased to announce its 10th store opening,” James Dremonas says. “We are celebrating bringing food to an area that has long been without options and are excited to be the anchor in this community. We appreciate the warm welcome from the neighborhood and look forward to making long-lasting relationships with the community members.”

Seven of Pete’s Fresh Markets are located within Chicago city limits. It is also expanding into more suburban areas with new stores coming in Bridgeview, Oak Park and Willowbrook, Ill.

Market Changes
Until recently, the metro Chicago grocery business had been led by Safeway Inc.’s Dominick’s stores. However, in December 2013 Safeway closed all 83 Dominick’s stores to focus on its California business.

That decision created a big vacuum in the Chicagoland grocery marketplace. “The grocery business here has changed dramatically,” Vanessa Dremonas reports. The Dominick’s closings “create an opportunity for us to capture a piece of that unclaimed market share,” she says. Pete’s Fresh Market is renovating a 45,000-square-foot former Dominick’s store in Oak Park. “It was an older store from 1989 and Dominick’s hadn’t put any money into it since then, so we are doing a complete gut rehab. The Pete’s process isn’t a cookie cutter formula. Each of our projects is custom-built and designed, which is why we aren’t opening all of our slated locations overnight.”

Stephanie Dremonas says “the dust still hasn’t settled” for the Chicago grocery industry in the wake of the Dominick’s exit. “A lot of stores are going to be trying to capture the former Dominick’s market share,” she observes. “A few have turned over projects quickly in just a few months but we still haven’t seen the industry settle. It is still evolving.”

Regardless of the economics of the Chicago grocery business, Pete’s Fresh Market is successful because it offers quality and customer service. “We don’t dictate and tell customers what they want,” Vanessa Dremonas says. “We listen to them.”