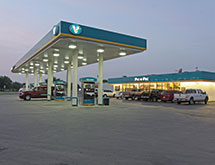 After 50 years, Pic-n-Pac Convenience Stores remains successful by making smart decisions, Director of Operations Phil Wuest says. “The company’s strength has to be our main focus,” he says.

Pic-n-Pac’s wise decisions have included growing itself at a conservative rate, as opposed to other chains that expand store count quickly. “They don’t recapitalize because they’re sucking the company dry,” he says. “My family has been good about not doing that.”

Based in McQueeney, Texas, Pic-n-Pac operates convenience stores in the Lone Star State that sell food, drinks, novelty products and gasoline. The company started C-Store operations in 1964 with the opening of its first convenience store that operated in an ice house format without fuel.

That store was the dream of Pic-n-Pac’s founder, Harvey Edward Wuest, who owned and operated supermarkets in and around the Seguin, Texas, area. When Wuest died in 1962, his sons, President Bobby Wuest and Purchasing Manager Buddy Wuest, sought to fulfill their father’s vision for the company.

After buying an old full service gas station, “They took that little building, put in some beer, soda, chips and candy, and made a convenience store out of it,” Phil Wuest recalls, adding that Pic-n-Pac slowly but steadily added more stores. “It was just ‘the turtle wins the race’ kind of [philosophy].”

Today, Pic-n-Pac has 15 stores in Texas that promote fuel brands such as Shell, Valero and Exxon. Each location, Wuest says, is serviced by his family’s own transportation company. “We haul to all of our stores and we haul some fuel for Susser and SEI Fuels,” he adds.

Quality Culture
Pic-n-Pac takes pride in being a local, family owned business, Wuest says. “We live our lives in and around the communities that surround our stores,” he declares. “We’re not in big cities. We’re in towns that are anywhere from 500 to 31,000 [in] population.”

As a local business, “We support local kids’ high school [activities],” he says, noting that this includes agricultural groups, sports teams and drill teams to name a few that compete with other schools.

Pic-n-Pac also maintains a “family” atmosphere within its walls, Wuest says. “All of our full-time employees and associates know us,” he says. “Everybody feels engaged and part of the [business]. That culture has been a big part of our success.”

Evolving Pic-n-Pac
Pic-n-Pac recently made changes to its locations, including adding single-bay automatic car washes to nine of its stores. “That’s been something that’s been a very good offering for our customers,” Wuest says.

The company also has implemented new software from Professional Datasolutions Inc. (PDI), PriceAdvantage, Digital Fuel Solutions (DFS) and Acumera to make it more efficient and automate various processes. By doing so, “We maintain a small corporate overhead,” he says.

For instance, the company has implemented cash management in its PDI software to reconcile bank statements and process payments via automated clearing house instead of cutting checks. “We import a lot of vendor and sales data into the system so we don’t have to complete many of the manual checks on daily paperwork,” Wuest says.

PDI’s Focal Point reporting also has helped Pic-n-Pac view itself through a better-focused lens, he says. “We use Acumera, who built and manages our [virtual private network], to allow PDI to operate over our network to move data electronically,” Wuest continues.

Additionally, “PriceAdvantage has allowed us to manage our competitive surveys and fuel pricing electronically without having to make a lot of phone calls back and forth,” he says. “DFS compiles our fuel inventory data and forecasts fuel deliveries, minimizing our effort to make all of the calculations.”

Thanks to the software, “We have not had to add staff,” he continues. “We’ve done a pretty good job with technology and administration, and keeping our costs down.”

Making food changes are not so easy for the company, Wuest admits. “Trying to figure out [what to] do or not do seems to be a real big challenge for us,” he states, noting that it prefers to add small programs as opposed to other chains that add “full-sized delis” to their locations. “Waste is always a factor when trying to sell grab-n-go prepared food.”

Integral Parts
Wuest joined Pic-n-Pac in 1990 after graduating from college. He praises Bobby and Buddy Wuest, who are his father and uncle. “They’re an integral part of the company and its success,” Phil Wuest asserts.

While Bobby Wuest has worked in his family’s businesses since 1954, Buddy Wuest has played a key role in purchasing since 1993. “He sets the prices and the product mix for our stores,” Phil Wuest says.

The involvement of the Wuest family in Pic-n-Pac has continued with the addition of his sister, Julie Sherwood. “She has taken on our in-store marketing,” he says.

Pic-n-Pac also has hired Rainman, a social marketing firm that will manage its web site and social media efforts through Facebook, Twitter and Instagram. “We’re trying to figure out how to use social media to drive traffic and interest,” he says.

Building The Brand
Phil Wuest sees continued but moderate growth for Pic-n-Pac. Along with trying to find “good dirt” for new locations, it is focused on pushing the company as a brand so “people recognize Pic-n-Pac over time,” he says.