Back to Profile Gallery > Pickleman’s 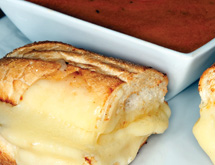 Pickleman’s was 20 years in the making when it first opened on Oct. 1, 2005. Owner Doug Stritzel had worked with some of the biggest names in the sandwich and restaurant industry. He had a vision for a franchised brand that above all focused on using the highest-quality products while creating profound and unique flavor profiles people love.

Offering a wide array of products with the freshest ingredients gives Pickleman’s toasted sandwiches, pizzas, soups, salads and desserts a quality that sets them apart. Delivering and catering to business meetings, school events, sports teams, fundraisers and everything in between allows Pickleman’s to bring its services to its customers.

Pickleman’s services include delivery, in-store, online and mobile ordering from its 17 locations across the Midwest. Pickleman’s has a new digital loyalty program that tracks dollars spent and rewards customers automatically on their smart phones. Customers can order online at www.picklemans.com or download the mobile app at the Apple or Google Play stores.

Online ordering at all Pickleman’s locations allows customers to browse images of every menu item before they order. In spring 2013, Pickleman’s launched its beta version of its mobile app for optimized ordering on devices. The Pickleman’s mobile app also features exclusive specials found only online.

In 2012, Pickleman’s introduced the Pickleman’s Pick 2, offering a combination of any half sandwich, half salad or 8-ounce soup for around $7. Pickleman’s also has dedicated a page on its website for healthy suggestions called Fresh Choices that features lower calorie menu items and suggested toppings.

Franchisee Opportunities
Through extensive negotiations with its vendors, Pickleman’s has acquired national account pricing on all food, beverage, paper and cleaning materials. The company also has aligned with the right vendors who are committed to Pickleman’s growth and a long-term relationship, Stritzel says.

Pickleman’s offers a corporate accounting management program to its franchisees. For up to two years, the program will pay bills and taxes, process payroll and audit reports daily through a franchisee’s account. This allows that franchisee to focus fully on the daily operations of the restaurant and not the time-consuming and sometimes frustrating back-office paperwork.

The company also is forming franchisee advisory panels and is working extensively with managers and owners who are in the stores each day to get feedback from their customers to make the most educated company decisions.

All store managers and franchisees must complete four to five weeks of corporate training. The company has clearly defined standards and daily checklists that guide employees from the minute they enter the store.

Vision of the Future
To become a Pickleman’s franchisee requires more than just meeting the financial standards. “Each store we have sold, the franchisee has come directly to us,” owner Doug Stritzel says. “Our product, our brand and our customer service are what we pride ourselves on, and that is what a potential franchisee sees when they walk in the door. As soon as we get a potential franchisee that submits and qualifies financially for ownership, the ball is in their court. We are not going to call daily or weekly to pressure them into signing an agreement. We want them to work for it and show the fire is burning in their hearts to start their own business. If they want it bad enough and truly want to be a franchisee, they will continue to seek us out and make sure a franchise agreement is signed.”

Similarly, Pickleman’s believes in controlled growth. “Many new franchise systems are out there letting anyone franchise no matter what their qualifications are or where they want to put the location,” Stritzel maintains.